Cher Masters, a teacher at Ruth Doyle Intermediate School in Conway, wants to live life to the fullest while setting a good example for her students.

A five-year survivor of skin cancer, Masters has an instant platform for talking to kids about protecting themselves from UV rays when they see the three-and-a-half-inch round scar on her left forearm.

Quick-witted and possessing an endearing, self-deprecating sense of humor, Masters said, “My first class called it a shark bite. They said I just needed to come up with a good story.”

It began as a pin-sized mole, she said.

“When I diagnosed myself, I thought mine was basal cell. It was just raised and pink. It didn’t look like melanoma. The scariest part was I was never sick. You assume people with cancer find out after being sick for a long time.”

Her husband, Chris, met her at the doctor’s office that day. Masters said she was blindsided by the news.

“If it hadn’t been for my husband . . . He took in all the information. I wasn’t able to process it. He was thinking rationally while I was literally dying in the room as she told me that.”

Russell had already scheduled an appointment with Conway surgeon Dr. Brock King, and the couple went immediately to a surgical consult.

“It had already been planned out, and that’s what I needed,” Masters said.

When she had the surgery, a large area around the small mole was removed to ensure the cancer had not spread. The cut was 3.5 inches around and as deep as the bone, Masters said. She had a skin graft over the area. Two lymph nodes were removed and tested, as was the area that was removed around the mole. Everything was determined to be cancer-free.

She also chose to have a few other moles removed during surgery that looked suspicious to her.

“I am willing to take any scars to have it off, because what if? I’d rather have the scar than the mole,” she said.

This year, to celebrate five years of being cancer free, Masters and her friends ran in the Toad Suck Daze 10K. A friend coined the term “cancerversary” for the date she learned she had cancer.

“I had never celebrated my cancerversary. It was always kind of a negative,” Masters said. “This is my fifth year of being cancer free. I should be celebrating. My friends said, ‘Thank you for giving us something to celebrate.’” 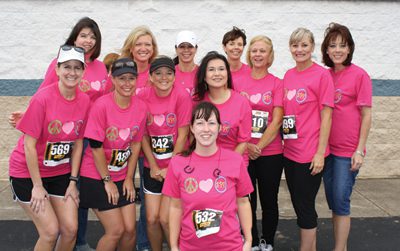 For the run, her friends had T-shirts made that said “Peace, Love and SPF.” She said she was surprised that a lot of people did not understand that “SPF” referred to sunscreen.

“I would consider myself a fine connoisseur of sunscreen,” she joked. “I have a huge hat collection. My kids wear hats outside. I don’t have too many people say, ‘Let’s go to the pool with Cher.’”

She does try to encourage others to wear sunscreen, although it is easier with her students, she said. To prevent her scar from being a distraction to new classes, she shows them a book she made with information about herself and her family. It includes a picture of the scar.

“I tell them plainly I didn’t wear sunscreen when I was little. It breaks the ice, but hopefully it sends a message too. I’m in a position where I can influence children and hopefully teach them how to be safe in the sun, even if it’s working it into my lessons somehow.”

She now goes back to her oncologist every six months for scans to make sure she is still cancer free.

“Dr. (Sue) Tsuda said it doesn’t play like other cancers. You’re never really clear. It hides so well. I still think every day, what if I didn’t look at this mole. That doubt, or that fear of it coming back is never gone.”

She also harbors a dread that “it could show up in one of my kids.” Her two daughters, Henley, 9, and Abby, 8, are too young to remember life before their mother was diagnosed with melanoma. Masters said she hopes she is doing a good job of teaching them to wear sunscreen.

As she continues to celebrate surviving, she plans to donate hair to Locks of Love and do other things to help people.

“Hopefully someone will remember to check their moles or see their dermatologist,” she said.

Her goals: “Being thankful for what I have, living life to the fullest, but also realizing I am setting an example.”

Masters said she has had support from her friends, family, church and fellow teachers at Ruth Doyle throughout her struggle.

“I certainly did not go through this by myself. It took a village to get me through it. I’m blessed to be around many people that care and wish the best.”