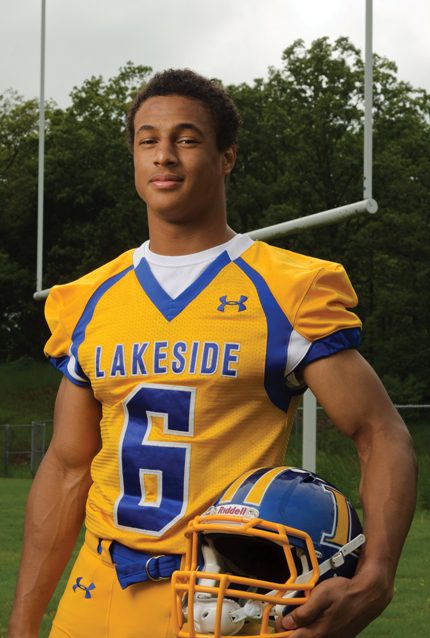 07 Oct Bradford 'sees it through' for Rams


Off to a 4-1 start and undefeated in 5A West conference play, the Hot Springs Lakeside Rams have emerged not only as one of the hottest teams in the 501 this fall, but also as one of the most dominating teams in Class 5A in 2015. In the midst of a record-shattering season with the Rams, senior all-purpose back Maurice Bradford Jr. attributes his success on the field to something a coach told him once after a tough loss.


“I hate losing,” Bradford said. “It’s the one thing that really gets to me. After last year’s loss to Camden Fairview, Coach Rockwell told me to read a poem by Edgar Albert Guest called ‘See It Through.’ There’s one line from that poem that really sticks out to me. It says, ‘Remember you are facing just what other men have met.’ That poem has had a lot of impact on how I see the game, and now, when we lose, I remind myself that it’s how you overcome your losses that make you stronger as an individual.”


Bradford was selected to this year’s 501 Football Team — 27 players representing all 11 counties of the 501. The team boasts the best the 501 has to offer both on and off the field. Bradford was nominated by Lakeside head coach Jared McBride.


“Maurice is one of the best all-around football players that I have coached,” McBride wrote in his nomination. “He hates to lose but is the most respectful player. He does all the ‘dirty work’ for us on offense. He blocks, catches and runs as well as anyone and makes the most of his tackles on defense. He is the ultimate sportsman and a game changer.”


A California native, it’s no surprise that the multi-talented Bradford comes from quite the athletic family.


“My family has a large background in football,” Bradford said. “My uncle, Vincent Bradford, used to play for the San Francisco 49ers and also played for the Razorbacks. My dad, Maurice Bradford Sr., has always been around sports and he has always encouraged me to play sports. I got my football start in a Pop Warner League in California when I was 6 or 7, and I’ve never stopped since.”


Though he has experienced playing football in two states, Bradford says that it wasn’t until he and his family moved to Arkansas that he realized what he truly wanted to get out of playing the game that he loves.


“My favorite football memory came at the beginning of last season,” Bradford said. “It was the season opener and we were playing against Lincoln at Razorback Stadium in Fayetteville. That was a really cool experience. Playing on the same field the Hogs play on — it really got me thinking about playing football at the collegiate level. That day, I decided that I wanted to play on that field again. I wanted to have that experience again. I wanted to play at Fayetteville and become an Arkansas Razorback.”


Since that day, Bradford hasn’t given up on his dream of becoming a Hog.


“This year, I attended the spring game in Fayetteville and went to talk to some of the coaches and recruiters,” Bradford said. “This year, they have a close eye on me. I’m excited to start the recruiting process to Arkansas soon.”


In his senior season, Bradford has been lighting up the scoreboard with the Rams. Through the season’s midway point, the talented senior leads the team in rushing with 79 carries for 613 yards and 17 touchdowns and has added 18 receptions for 276 yards and a touchdown. Bradford is equally as dominant on defense, amassing 30 tackles, three sacks, two forced fumbles and a blocked field goal in just five games.


“This year, I want to put up the stats,” Bradford said. “I want to be able to attract coaches and get myself ready to play on the next level. Coach McBride has his game plan, and that’s to always prepare well for each team. With our game plan, if executed correctly, we can pull wins. We’re always looking for ways to make ourselves better, and we know we can get it done.”


Bradford excels in the classroom. When he’s not on the football field, the senior contributes to Lakeside’s Art, Beta and Math clubs.


“Maurice is a 4.3 GPA student,” McBride wrote. “He works hard in the classroom and is a leader in our tough school. He always says ‘yes sir’ and ‘yes ma’am’ and helps with the youth in our school any way that he can. He is the total package.”


An avid artist, the senior recently won grand prize honors in multiple art competitions in Hot Springs, including Have a HeArt for Art, the Sister Cities International Young Artists Showcase and Stamp Out Smoking.


“I really excel in art,” Bradford said. “Over the past year, I’ve won a few local art competitions. Drawing is definitely my kind of thing.”


In the community, Bradford says that there’s much to be learned from the many volunteering opportunities that exist across the 501.


“In Beta Club, we do volunteer services around Hot Springs,” Bradford said. “There are a few local nursing homes in Hot Springs that I visit in order to connect with the elderly and help out with whatever they may need. I think there’s a lot of history in nursing homes that many may not see. I like to sit with the elderly and hear their stories about World War II and the Great Depression. It’s a very eye-opening experience.”


Bradford and the Rams play at White Hall at 7 p.m. Friday.