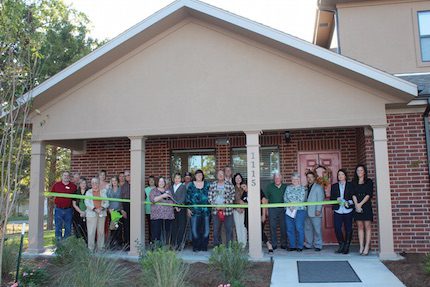 
It’s been about a year since the Bethlehem House homeless shelter moved into its new home and already the agency has been able to meet its financial obligations for the facility, ahead of schedule.

“As board president, not having a mortgage on this facility is nothing short of a miracle,” said Aimee Prince. “It’s unheard of for something of this magnitude to be fully funded from the start. It’s something that we prayed for but didn’t expect to receive. We should never question God’s ability to make things happen.”


Bethlehem House was started by a group of volunteers in 1991. The group leased a 3,200-square-foot, 80-year-old Victorian home on Faulkner Street that was used for 19 years to serve 16 to 23 people at a time.


With the Faulkner Street facility under constant maintenance, the board undertook a capital campaign led by Johnny and Stacia Adams. The campaign officially kicked off in February 2012 with a goal of $1.3 million. Lead gifts came from Conway Corporation, J.E. and L.E. Mabee Foundation and The Windgate Charitable Foundation.


Individual, church and corporate gifts and pledges were secured throughout the community. Several fundraisers were held to support the campaign.


The completion of the goal was announced in December 2012.


Dirt work started in February 2013, with the move into the new facility October 2013.


“We had a line of credit that we did have to use some of, but paid off at the end of August,” said Aimee. “We never had a mortgage of any kind. After the sale of the old building and operational income that came through via various grants and donations, we were able to fulfill the financial obligation early.”


While the new facility has been paid for, Bethlehem House continues to look to the community for support.


Financial donations are still needed for the operational fund to allow daily activities such as education, transportation and regular household obligations like keeping the lights on. “The operational fund is also critical in keeping us fully staffed,” Aimee said. “Staff is key to keeping this program successful, and running a house 24 hours a day is expensive.”


“We are always in need of food donations to fulfill food box requests that we receive daily,” Aimee said. “We are not where we can give boxes out every day. Therefore we cannot keep up with the demands to feed hungry families on a daily basis.”


Several fundraising events are planned over the next several months:


In the meantime, Aimee is appreciative of the community’s ongoing support to help those in need. “I could not be more proud of this community for coming together and making this happen,” Aimee said. “We also have an incredible board that has worked hard to help us get to this point. I’m fortunate to have been a part of this group; I wouldn’t trade these experiences, both good and bad, for anything.”


Bethlehem House Executive Director Judi Lively added, “I keep coming back to Psalm 127:1, ‘Unless the Lord builds the house, its builders labor in vain.’ I am quite certain God is building this new Bethlehem House.”