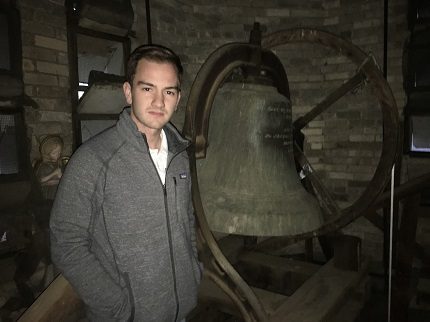 If anyone in the vicinity of St. Joseph Church has heard ringing recently they shouldn’t run to their doctor claiming tinnitus. The St Joseph Church bells are back.


The two bells, which were cast in St. Louis in 1891 for the second St. Joseph Church (which replaced the first one after it was destroyed by a tornado in 1883) stopped ringing years ago.


Many assumed the reason for these chimeless years was a bell malfunction.


In actuality, the melodious tones ceased because of a lack of volunteers. In the past, the bells had to be rung manually by pulling on a rope.

Finding volunteers to ring the bells every 15 minutes of everyday proved hard.


The problem was recently rectified by parishioners Tim Nabholz, Ray Gunther and Jeff Lock, who installed the ChimeMaster computerized ringing system. It can be programmed to automatically ring the bells at certain times.


The bells now ring from 6 a.m. to 9 p.m. every quarter hour with a different ring noting the half and top of the hour, as well as five minutes before every Mass. The bells can also be rung with this system for weddings and funerals.


Most students are pleased to be hearing the bells again. “It’s heartening to once again hear the bells ring out over the town," said Triple Williams. "It reminds us we’re part of a Catholic community."