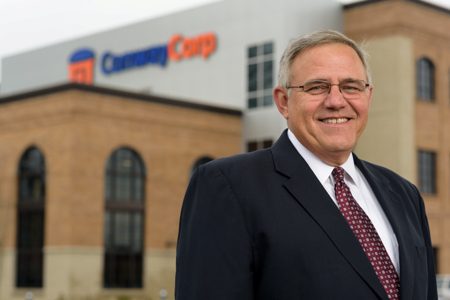 
Richard Arnold will soon wrap up a noteworthy career that spans nearly 40 years at Conway Corporation.


A native of Harrison, Arnold’s first job out of college was in 1978 at Conway Corporation, where he will retire from in May as the chief executive officer.


His introduction to Conway and Conway Corporation came while he attended the University of Central Arkansas for two years before transferring to the University of Arkansas. He met the late Sandy Brewer while in college and became acquainted with his parents, Bobbye and Jim Brewer, who was the chief executive officer at Conway Corp.


“I knew it was a great company,” he said. “When I heard that they were looking to expand, I interviewed for a job and moved here. It was a great opportunity for me.”


Learning to write computer coding, Arnold was tasked with helping the corporation migrate to computers. At the time, billing, accounts receivable and payroll were on computer. “Everything else was done the old fashion way, the accounting, the ledger system, the payables, with a typewriter and ledger books. That’s what really intrigued me.”


Working in the data processing department, Arnold had various job responsibilities – from working with customers to re-reading meters. “When you were as small as we were back then, you did a lot of things,” he said. “We wore a lot of hats. The software was the key part of my responsibility. That was fun. You got to see the fruits of your labor pretty clearly,” he said, adding that the work was very rewarding, getting to use his accounting knowledge while learning something new.


Looking back, Arnold recalled that he had a great opportunity to learn and grow up in the corporation. He said in the early years of his work that the city and Conway Corporation were much smaller than today. “We were all in one building. You were interacting with our engineering department and crews. The pace of work in Conway at that time was different too,” he said, adding that there was more overall awareness of current projects. “I was interested and I wanted to learn more about it.”


Arnold said there were also some great mentors at Conway Corporation. “Jim Brewer would be one of the first. He was ready to share his knowledge and experience. Bill Hegeman was the same way.” Describing Brewer “an extreme visionary,” he cited Brewer’s work to add cable television to Conway Corp’s offerings as well as his pursuit of Brewer Lake as a water source for the city. He said Hegeman was also instrumental and progressive in pursuing internet services for the city.


Single when he went to work at Conway Corporation, Arnold said he was very interested in doing corporate accounting but didn’t give any thought that he would make a career out of his work at the utility company. Or, that he would one day would be the chief executive officer. “I couldn’t imagine not ever working for Jim Brewer,” he said of the time.


“I didn’t really know I’d be here 38 years or even 38 months, but you get in a place and you start planting roots and making some relationships,” he said. “That’s exactly what happened here. I kind of fell in love with the people I work with and the community, and how we relate to that community. Someday you go, ‘Well, I can’t see myself going anywhere else. I like it here.’”


In the late 1980s, when he became the manager of finance and accounting, Arnold discovered the supervisory role was different but rewarding. “That may have been a tipping point,” he said. “I realized I really liked managing people and working with customers. That’s when I saw an opportunity in a broader picture.”


In 1996, he was promoted to chief financial officer, a position he held for two years before being named chief executive officer. He is only the fifth person to hold the top position.


While he has learned a lot on the job, Arnold recognizes he is not an engineer but knows enough to ask the right questions and look to the talented team that has been assembled to help lead the organization.


Over time, Arnold has seen many changes – from the size and needs of the city of Conway to regulations imposed by the federal government. Conway Corporation too has changed and evolved, offering services that were not in existence when the utility was created. “The pace is so different now than it used to be,” Arnold said. “I think some of that comes from being in a vibrant college town. I know in 1978 it was a different pace, more laid back. There’s a lot going on now all the time. It is a challenge but it is fun but it’s where you want to be…We are blessed to be busy and to have a lot going on.”


Arnold said Brewer was able to be more hands-on throughout the organization because it was smaller, and Conway operated at a different pace. “It was a more centralized organization, by design, back then. Today, you can’t manage what we have that way. There’s just too much. Bill Hegeman actually reorganized us when he took over.”


Arnold said one of his biggest responsibilities is planning and forecasting to meet the city’s future needs. He cited the recent opening of the Customer Care Center on Locust Avenue as an example of long-range planning. “We knew we needed a new facility,” he said, adding that Conway Corp had outgrown its Prairie Street location, which was remodeled and repurposed for 30-plus years. A 15-year campus master plan was developed to ensure adequate space for employees and parking for customers. “We are happy to see that we do have a way to continue to be here and invest in downtown. That was a relief for me, because Conway Corporation has been right here,” he said, adding that Conway Corporation has a large presence on South Harkrider, where the operations center is located and better suited.

“This is where we wanted to be. Downtown is our home. This is a great solution and it gives us a path forward.”


Addressing Conway Corporation’s need for additional space was one of the items Arnold wanted to address. “I wanted to get this resolved before I retired,” he said.


Other significant accomplishments that he has seen include raising Brewer Lake to help address potential water usage problems should the city experience a major drought; construction of a new wastewater treatment facility in the Lollie Bottoms; and advancements in internet service. He said Conway Corporation has also added new substations and improved systems to meet the city’s needs for electricity, with the capability of shifting the load should a problem occur.


Arnold is also proud of the utility’s new data center, which has been structured to withstand up to an F4 tornado. Having seen tornado destruction in other cities, it is the threat of severe weather that causes him to lose sleep at night when storms move through. “You pray that never happens to your community,” he said, adding that the center will help protect essential services.


While focused on meeting the growing and changing needs of the citizens of Conway, Arnold has also led the organization’s continued support of local education, which he considers an investment in economic development. Conway Corporation was created more than 85 years ago when the city faced the possibility of losing Hendrix College and Central Baptist College.


Having traveled and attended trade shows and other meetings, Arnold said he has not come across any other entity quite like Conway Corporation. “In the beginning, those guys were laser-focused on keeping Hendrix College and keeping Central College. They knew we were an agricultural community, outside higher ed, and they knew if we lose higher ed presence in Conway, what’s our future?”


“When Conway Corporation was formed, it was to fix an immediate problem, it happened to be higher ed,” he said, adding that Conway is known as the City of Colleges and most in the state are familiar with its institutions of higher learning. “That was visionary,” he said, adding they created an entity that would last and manage the city’s utilities while supporting economic development. “I am amazed that Conway’s leadership at that time was that far-sighted.”


Arnold speculates that if the city fathers were alive today and could see the vibrant college campuses and the outstanding Conway schools, they would be pleased. “They would definitely say we did something good."

The utility’s commitment to local educational institutions was illustrated most recently with the dedication of the Conway Corp Center for Sciences at the University of Central Arkansas. “I think that honors the corporation and its support for higher education,” Arnold said, adding that he loves the name of the building. “That day was a special day.”


While the future appears bright at Conway Corporation and his new office overlooking Downtown Conway might seem like an enticement to stay around for a while longer, Arnold said it is time to retire and pass the reins. His last day is Wednesday, May 31. He will continue in a consulting role for a short time while pursuing hobbies like fishing and golfing and spending more time with his wife, Beverly.


Arnold said he will miss most the employees at Conway Corporation. “That part of it is tough,” he said. “They’re your friends. You care about them and they care about you.”


In its history, Conway Corporation has had only five individuals in the top leadership position, which Arnold explains speaks to the organization’s incredible stability. “I hope the next person will have as much fun as I did and as long of tenure as I have,” he said, adding that he is leaving the organization with a great team in place. His advice to his successor is to hire good people, train them well and maintain the Conway Corporation culture of service.


Arnold, 62, explained that he struggled with his retirement decision and gave it a lot of thought and prayer. “It was pretty obvious it was time. I feel like our staff is in great shape and we have wonderful people from A to Z,” he said, adding that he is proud of the customer service legacy at Conway Corporation.


“It became pretty obvious to me, it was time.”