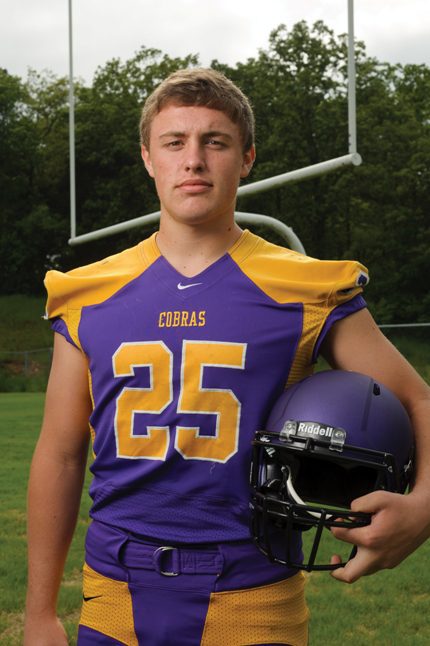 
When it comes to success on the football field, some may argue the team with the best talent benefits the most. Others, like Fountain Lake senior running back and linebacker Parker Ross, believe that the key to football fame comes from something more — great leadership.


“Everyone on the team — we’re all best friends,” Ross said. “We’re all like one big family who leads together. We like to push each other and make each other better as the season goes on. In practice or games, we’re constantly encouraging one another, and that makes us want to work harder as a unit.”


Ross was selected to this year’s 501 Football Team — 27 players representing all 11 counties of the 501. The team boasts the best the 501 has to offer both on and off the field. Ross was nominated by his coach, Tommy Gilleran.


“Parker leads by example,” Gilleran said. “Everything he does, he does himself before he tells anyone else. He is easy to get along with and always seems to draw people in with whatever he is doing. He excels not only on the field, but in the classroom as well.”


Ask anyone around Fountain Lake — the Ross family name is synonymous with football. Following in the footsteps of older brother and former 501 Football Team honoree Mackenzie “Big Mack” Ross, suiting up for the Cobras just made sense for Parker.


“We’re the football family,” Ross said. “My dad is always asking my brother and me if we want to go over film or go over the playbook before every game,” Ross said. “During football season, we talk about the game 24 hours a day. We’re talking about football at the dinner table. In our house, your head is pretty much always wrapped up in the game.”


During his career with the Cobras, Ross has undoubtedly left his mark — collecting multiple awards and making many memories. But there’s one moment that the senior says he’ll always remember, even after his playing days are over.


“My absolute favorite memory is getting to play running back while Mackenzie was playing fullback,” Ross said. “It was the Class 3A semifinals against Harding Academy, and I had always dreamed about getting to play in a big game alongside my brother. Though we lost a really close game, it will always be my favorite game I’ve ever played in.”


As the Cobras enter their second season in Class 4A, Ross says that the team learned plenty from its 2014 campaign and expects to rise up to the challenge this year.


“Playing in the 7-4A conference is like playing in a different world,” Ross said. “Moving up from Class 3A, we knew it would be tough. We knew there would be growing pains. We won some big games and lost a few close ones. Ultimately, it was just a hard season. However, we like to rise up above whatever anyone else expects us to do. We like to live up to the challenge.”


Despite the difficult schedule, Ross finished 2014 as one of the top running backs in Class 4A, rushing 205 times for 1,651 yards and 23 touchdowns, earning him all-conference and all-state honors. Defensively, Ross finished second on the team with 93 tackles, seven pass defenses and two interceptions. With such a heavy workload, Ross’ secret to staying healthy on the field is a lot simpler than one may expect.


“All it takes is a little Epsom salt and a lot of luck,” Ross said.


Fountain Lake dropped the season opener to Little Rock Christian a week ago, 47-7, after beating the Warriors by 10 points last season. For Ross and the Cobras, however, the bigger picture is still quite obtainable.


“As a team, we believe that the sky is the limit for us this year,” Ross said. “We want to make it past the first round of the playoffs again. We want the team to succeed and feel like they did their best every game. We all work hard and have a great work ethic. Together, we can do anything.”


Off the field, Ross plays forward for Fountain Lake basketball and runs the 4x100m and 200m and throws the shot put for the school’s track and field program. When he’s not lighting up a scoreboard, however, the senior is finding new ways to be a better motivator for his teammates.


“My biggest goal in any sport I play is to try and be a better leader for my team,” Ross said. “I believe that it takes a lot of hard work to be a successful leader. This year, I attended a leadership camp through Fountain Lake’s Interact program, and I learned a lot of great life lessons that I use both on the field with my coaches and teammates and off the field with my family and community.”