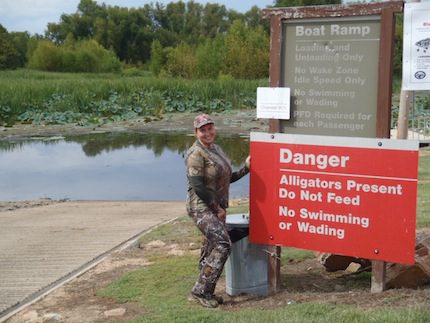 
The season ran two weekends in September. McCabe has applied for a hunting permit all six years and compared finally being selected for one to “winning the lottery.”

McCabe comes from a reptile background, studying biology at the University of Central Arkansas.


“I’ve harpooned them, I’ve marked them, I’ve hatched out babies, all kinds of things,” she said. “This was unique in that way, too, because I actually got to go back out there and potentially see animals that I’d already worked with in some way, shape or form.”


McCabe received one of three permits from the Arkansas Game and Fish to hunt above the dam at Millwood Lake in Ashdown.


Hunters were allowed to take up to three people with them on the hunt, but the hunter who received the permit must be the one to kill the alligator.


A Millwood Lake park ranger told McCabe that he had seen a large gator below the dam at the lake. It was the same area that Mike Cottingham of Prescott bagged a record gator of 13 feet 3 inches and 1,380 pounds in the first weekend.


McCabe and her team returned the second weekend, seeing the bull again, but this time they were able to see just how massive he was.


McCabe used a harpoon to try and capture the gator, but the attempt went unsuccessful.


“I threw my harpoon at him, and it just bounced right off,” she said.


There were other ways of going about catching the gator including placing a snare around the animal’s head, but McCabe did not feel comfortable in attempting the move on such a large gator.


After the unsuccessful attempt on the bull, McCabe moved on to a smaller female she said was in the 6- to 7-foot range. Even though the female was considerably smaller, McCabe ran into the same problem of a tough hide and was unable to bag the gator.


Although McCabe was unable to capture a gator during her hunts, she’s not disappointed. McCabe said she was happy to have had the experience, especially after applying for a permit, unsuccessfully, for five years.


“It was a fun experience to get out there and get so close to them,” McCabe said. “It was one of those feelings where the adrenaline was unbelievable. It made me want to puke, and it’s just that feeling that will drop your stomach. It was really exciting.”


McCabe said she was close enough to touch some of the gators on the head, which is something she was not used to from her days of research. “You didn’t have to get close to them,” she said. “They
didn’t know you were out there, you just kind of went fishing for them. You threw your line out there, you reeled them into the boat and took care of it from there.”


This won’t be the end of McCabe’s gator hunting days if she has anything to say about it. She will continue to apply for permits in the future and hopes to receive another, even though she called this a “special experience” that she will probably not get to do again because of the rarity of being selected.


Although the outcome was not what she hoped for, McCabe is walking away from the experience with nothing but positives.