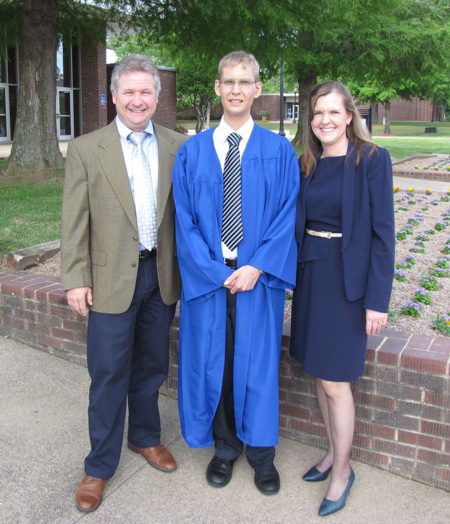 Instead of heading off to college to pursue his dream of being a vet, John Wray is battling a life-threatening disease that has robbed him of many things he enjoys.

Still, John remains upbeat and strong in his faith.


John — the only son of Lori and Thomas Wray of Greenbrier — began experiencing health problems in March when he felt weak after he competed in a music competition. Both John and his mother thought the weakness was due to the stress endured from John’s long hours of preparing for the performance. As the symptoms grew worse, the family took him to a doctor but tests did not explain John’s chronic and severe illness.


When doctors discovered John was suffering from a 75-percent liver failure, the family traveled to Barnes-Jewish Hospital in St. Louis for further treatment. “Within 24 hours, John was in ICU and stayed there for six days,” Lori said. “He was the sickest patient in the hospital and was placed at the top of the liver transplant list.”


After an hour of being placed on the list, a liver became available. Doctors, however, still had no conclusion as to what caused John’s liver to fail, so the transplant was canceled. Tests continued to be carried out and treatments were given, but no answers came.


“He had every kind of specialist you could think of,” Lori said. “And none of them knew why he was getting so sick. We were in St. Louis for 19 days, and the entire time John was set on getting better.”


John was discharged from Barnes-Jewish and placed on a treatment regimen. When he returned home, he seemed to be making a fair health improvement and began to go back to his normal life routines.


Almost two weeks later, he began to feel uneasy, sick and extremely weak. “I kept getting weaker and weaker,” John said. “I started feeling bad again, and I got so weak that I needed assistance standing. My condition got worse, and my parents took me to the (Arkansas) Children’s Hospital emergency room.”


John was admitted and diagnosed with a staph infection of the blood. If not treated immediately, John was in danger of dying. During his stay, John was visited by every specialist ACH had to offer, and treatment for the infection began. He spent the next 14 days in the hospital, and each moment and ounce of strength he had was used to get better in time for his high school graduation.


“In the hospital, I read the Bible, especially the books of Job and John with my mother,” John said. “I think my dad said it better than anybody else when he said, ‘When you’re in the hospital with a disease that nobody really understands, there is absolutely nothing to put faith in but God.’”


The family prayed, along with the prayers from Greenbrier and surrounding communities, and John got better. A small setback caused by medications John was taking caused him to visit the hospital for a third time, just days before his graduation. His medication was switched, and John pressed forward with getting healthy again.


John was able to walk during his high school graduation and was met with a five-minute standing ovation on the stage.


“I absolutely believe that God got me through this,” John said at that time. “I believe that keeping faith, through the prayers from the community that I received, really helped me recover so quickly. So many people from so many different areas just sent the request to God, and He delivered. What takes some people years to recover from I survived in a few months.”


In the weeks that followed, John began working full time at the After Hours Animal Hospital in North Little Rock. “He did so good all summer,” Lori said. “Every day he came home from work he would say, ‘I can’t wait to go back to work again.’ He worked alongside eight different veterinarians and was so happy because his dream is to one day become a veterinarian. He felt he was working at his dream job already.”


As the end of summer approached, John took a trip to California by himself to visit aunts, uncles, cousins and grandparents before moving into his dorm room at the University of Arkansas at Fayetteville on Aug. 22.


But he began having problems.


“After he fainted a couple of times, my husband said we have to get him home to Arkansas Children’s ER as soon as possible, so I changed his airline ticket to come home two days early,” said Lori. “I was on pins and needles, hoping his plane change/connection flight in Phoenix would go smoothly and he would not faint again.”


When he arrived home Aug. 18, John’s parents took him immediately to ACH, where he was admitted. “They ran tests and gave him seven units of blood over a two-day period,” Lori said. “How he had functioned so well with only a little bit of blood running through his body is a mystery.”


John was diagnosed with leukemia on Aug. 20 and began chemotherapy almost immediately. “He has been given a 75 percent chance of beating it, with a three-year action plan the doctors at Arkansas Children’s Hospital have set up for him,” Lori said.


According to Lori, hematologist Dr. Kimo Stine shared with John some news about the three things he holds dear:John can’t be around any animals that are not his own for the next three years. “Remember he works at a veterinary emergency hospital,” Lori said.


John can’t start college this fall. “He so looked forward to going to college since he was 5 years old. Don’t ask me how he even knew about college at that age,” Lori said.


The chemo will make his hands numb, affect his jaw and create sores in his mouth — meaning he will be unable to enjoy his hobby of clarinet playing.


“So everything John held so dear in his life has been stripped from him,” Lori said. “Despite this, once he got oxygen flowing to his brain again from the blood transfusions, he was upbeat.”


“When your morale goes bad, everything goes bad,” John said. “Everything follows your attitude. You cannot lose a good morale, and you can never lose faith. You have to see the future. You have to see where you want to be before you actually get there and stay faithful that one day, you will get there.”


“Our family is grateful for everyone who has lifted our family up in prayer and there is no way we can ever repay them for it. We are going to ‘pay it forward.’”