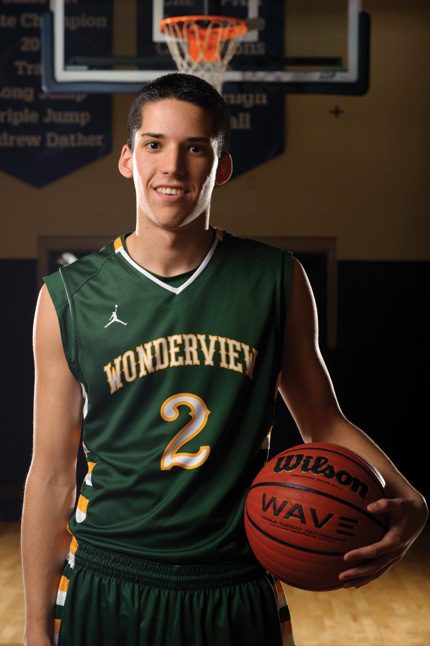 21 Jan Wright: The 'glue' for Wonderview


Every team needs a player that holds it together. For the Wonderview Daredevils, Jordan Wright is that player.

“Jordan has a wonderful work ethic and has a very high basketball IQ,” said Jerod Squires, Wonderview’s head coach. “He understands his role on our team and excels at it. Jordan is our glue guy on the offensive and defensive ends of the court.”


Wright was selected to this year’s 501 Basketball Team — 24 players representing the best the 501 has to offer both on and off the court. Wright was nominated by Squires.


“He knows what he does best for our team to be successful and he does his job,” Wright said. “He makes his teammates around him better and rarely makes mistakes.”


The senior forward has been playing basketball since his early days when his father introduced him to the sport as a small child.


“Both my mom and my dad played,” Wright said. “My mother is an alum from Wonderview. We’d play in the backyard or in the gym ¬— just wherever we could play.”


Wright has come up the ranks at Wonderview. His class went undefeated together in the ninth grade.


“We always hang our hat on defense,” Wright said. “That year, we were physically dominant and pretty stout for how young we were.”


Wright came off the bench last year for the Daredevils and was the team’s “high-energy defensive player.”


“I expect Jordan to be a great defensive player this year as he has always been for us,” Squires said. “He has also worked very hard in the offseason on his outside shooting, and I look for him to be more of a scoring threat this year.”


Wright takes pride in being known as a defensive player and has worked hard to become even better on that side of the court.


“I’ve had to go through some tough times, particularly physically,” Wright said. “I’m a late bloomer. Just getting physically dominant is one thing I’ve been working on the last few years. I work out each and every day during the summer.


“I draw most of my inspiration from my dad, Michael Wright, just because he introduced me to the game. I try to emulate my game after my cousin, Blake Brents, who played. He was a senior when Wonderview won the 2010 state championship.”


At 23-6 overall and 7-1 in conference, the Daredevils have their eyes set on another deep state tournament run.


Off the court, Wright is involved in FCA and Beta Club at Wonderview. He attends Bethel Missionary Baptist Church in Morrilton.


“Jordan is a very respectful, trustworthy and humble young man,” Squires said. “He has great character, and I never have to worry about what he is doing off the court. He takes a great deal of pride in everything he does.


“Jordan has been a coach’s dream from his first day in seventh grade. I have never had one issue with him on the court or off. He has been a great role model for our younger players.”


Wright and the Daredevils travel to Guy-Perkins this Friday.