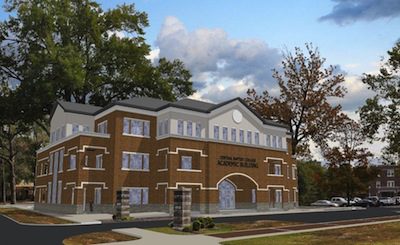 Construction is scheduled to begin in August on the 37,000-square-foot academic/administration building at Central Baptist College.


Plans for the project were unanimously approved during a recent meeting of the Historic Downtown Commission.  Landscape designer Barry Williams of Crafton Tull shared information with board members about the project and answered questions. Due to the nature of construction, several existing trees will have to be removed, but Williams explained that CBC plans to not only replace those trees, but to go "above and beyond" by planting additional trees, flowers and ground coverings that will add to the beauty of the campus, and the surrounding neighborhood.

At the groundbreaking earlier this year, CBC President Terry Kimbrow announced that an anonymous couple had made a $5 million commitment to Central Baptist College for the academic building. A $12 million capital campaign was also publicly launched at the event.


The new academic building is the first major project in a 10-year campus master plan tagged as Vision 2020: A Miracle in the Making.  According to Kimbrow, Vision 2020 is a plan to complete 10 major construction projects over the next 10 years to accommodate a projected enrollment of 2,020 students.


Plans are for the academic building to house 15 classrooms, a teaching computer lab, and a 100-plus seat lecture hall.  The building will also have conference rooms available for students and the public to use. Some additional features of the building include a World Missions Map in the administration area and hosting of the CBC Administration, the Bible and PACE departments.


“We have enjoyed record enrollments the past five years,” related Kimbrow.  “Even at half of our present rate of growth, we will reach 2,000 students by the year 2020.”  The first three projects in the plan include the new academic building, the complete renovation and expansion of the current library, and the construction of a new residence hall.


CBC had already begun the quiet phase of a capital campaign last September with the CBC board of trustees’ approval of an initial goal of $5 million.  At Kimbrow’s request, they gave him discretion to increase the goal at such time the initial goal was reached.  Conway Corporation voted unanimously in their January director’s meeting to contribute $750,000 to the building.


“Last September, I presented my vision to the student body, the board, and employees and asked them to devote time to praying that we would soon reach the $5 million goal,” Kimbrow said. “I knew it was only a matter of time.  I just did not know how it would come about.” Kimbrow also noted that the support of the community and in particular the commitment by Conway Corporation was instrumental in helping secure the multi-million dollar gift.


The $5 million gift is the largest single contribution in the history of the institution.  “I am overwhelmed by the generosity of this couple,” commented Kimbrow. “They truly have a love for CBC and want to see the mission of the college strengthened and the physical campus expanded.”