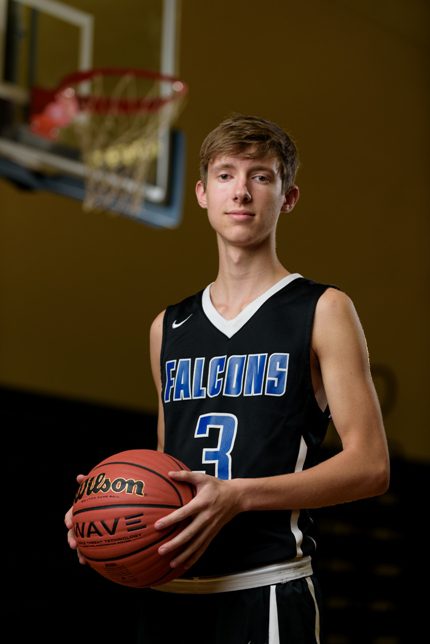 07 Dec Woodfin ‘confident’ on the court


Faulkner County Falcons guard Judson Woodfin wasn’t always the leading scorer on his team. In fact, it wasn’t long ago that the senior struggled with a personal challenge that kept him from playing at his best.


“I wasn’t always good at basketball,” Woodfin said. “Whenever I stepped on the court, it’s like my skills would just disappear. I’d be too scared to miss a shot and getting my coach mad at me. It was something I struggled with for a long time.”


“One night, before one our games, my brother, Evan, helped me face my fears,” Woodfin said. “He convinced me that if I missed a shot it was fine, and even if the coach did yell at me, it didn’t matter. He taught me to keep shooting and to be confident in my skills. That night, I scored 25 points — my highest point total at the time. I was used to scoring single digits before that. Ever since that game, I’ve gotten better and better, and I don’t look back.”


Woodfin was selected to this year’s 501 Basketball Team — 32 players representing the best the 501 has to offer both on and off the court. The team is sponsored by First Security Bank and First Service Bank. Woodfin was nominated by his head coach, Dwight Balch.


“Judson is a consummate teammate first and foremost,” Balch wrote in his nomination. “He is an unselfish player who knows and plays within his role on the team. He is our shooting guard and leads our team in scoring and steals. He is a student of the game with a high basketball IQ.”


Thrust into a leadership role as one of the team’s few seniors, Woodfin has already learned much in this season’s first few games.


“I’m the only returning starter this year,” Woodfin said. “Having lost six seniors last year, some would call it a rebuilding year for us. I’ve set a goal for myself to become a vocal leader on the court. I’ve had to learn to be unselfish, more patient and disciplined on defense. Those are our priorities as a team.”


“Judson is a team player who puts team success ahead of individual success,” Balch wrote. “As a senior, he should lead by example in his work ethic both on and off the court. As coaches, we expect him to be our go-to player in clutch time. We expect him to lead the team in scoring and steals and to make other players better on the court.”


According to Woodfin, one of his early goals for this season is to develop better team chemistry.


“This year’s group has only played together for a short period of time,” Woodfin said. “Therefore, we haven’t had a chance to build a great chemistry with each other yet.

There are some kids on the team who don’t get to play a lot, and we’ve worked to get them real game experience. There are some games where I’d like to stay in and reach 40 points, but I know that my personal goals are less important than making my team better.”


“Last week, we played against a really good Northwest Arkansas Hornets team,” Woodfin said. “They’re ranked high nationally and are a very good team. Going into that game, no one expected us to win. Coach Balch told us to go into the game, run our offense, play well and see what happens.”


With nothing to lose, the Falcons gave the Hornets everything they had.


“During that game, our younger players started taking shots and growing more confident in their abilities,” Woodfin said. “We played the Hornets close, but lost a close game. Even though we lost, it was good for us because we started shooting the ball better as a team and became more confident in our scoring ability. I think we’ll reflect on that game to get better as the season goes on.”


“Last year, we finished as runners-up in our age division in the national tournament,” Woodfin said. “It was really cool for us because no one expected us to do that well against some of the best teams in the nation. Being able to make it that far, while playing alongside my brother, Evan, in his final year, is something I’ll never forget.”


Off the court, Woodfin works at Chick-fil-A and is a member of the youth group at Vilonia First Baptist Church. In his free time, the senior enjoys music and plays multiple instruments. After high school, he hopes to continue playing basketball at the collegiate level.


“I’ve never been super athletic,” Woodfin said. “I’ve never been fast. I can’t jump very high, and I can’t dunk. However, I pride myself in being able to outsmart my defenders. I’ve always used other things to my advantage than my athleticism. With my shooting ability, I take what the defense gives me and go from there.”