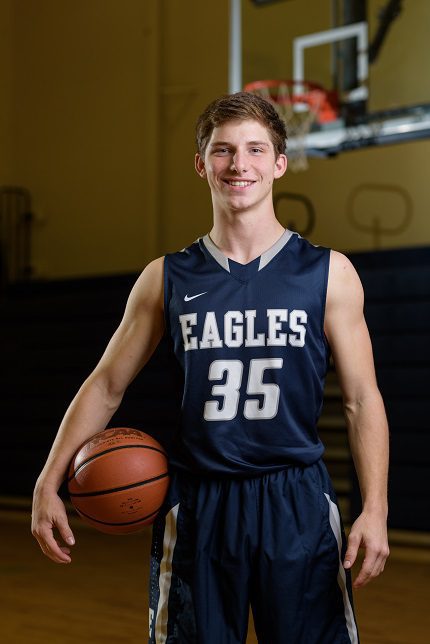 
After winning just five games over the past four seasons, Conway Christian has re-emerged this year, taking the Class 4-2A conference by storm as one of the top teams to beat, taking the program to new heights.


“Coming into this season, Conway Christian hasn’t been known for basketball,” junior guard Jacob Wood said. “In the past, we were lucky to win two games in a season. This year, we’ve already won eight games halfway through the season, and we’re not done yet. Our motto this year was to change the image and culture of basketball at our school, and it’s showing through our play.”

Under former Parker’s Chapel head coach Trey Lynch, Wood and the Eagles are buying into a new scheme in a big way.


“Coach Lynch is a great coach,” Wood said. “He eats, sleeps and breathes the game, and our team and school have embraced him with open arms. We’re listening to what he has to say and buying into his philosophy, and the results are showing within our record.”


Wood was selected to this year’s 501 Basketball Team — 37 players representing the best the 501 has to offer both on and off the court. The team is sponsored by Conway Ortho and Sports Medicine, Conway Regional Health System and First Security Bank. The junior was nominated by Lynch.


“Jacob is a playmaker who can score in multiple ways and knows how to run the show,” Lynch wrote in his nomination. “He generates a lot of offense through his playmaking, scoring and leadership skills. He’s a great leader, takes initiative and is solid in the classroom.”


Wood has been around basketball for as long as he can remember. From following the footprints of his family to blazing his own trail for the Eagles, the junior has learned many lessons about leadership, stemming from his earliest days with the sport that he still utilizes on the court today.


“At an early age, I learned that whether things are going good or bad, you have to carry yourself the same way,” Wood said. “Your emotions, good and bad, are contagious to the rest of the team, and, over the years, I’ve gotten better at trying to keep my teammates positive when things go bad.”


After defeating cross-town rival St. Joseph for the first time in school history earlier this season, Wood and the Eagles are primed for a big rematch this week.


“There’s no other game like it,” Wood said of the rivalry. “In our first game of the season, we beat them for the first time in school history and checked one of our team goals off the list right away. However, they’ll be back on a mission come Friday. Coach Bruich is a great coach, and he’ll have something cooked up for us. We’ll have to shoot the ball well and limit their possessions, but we are well-rested, we match up well against them and we gave them problems before. I like our chances.”


Off the court, Wood has enjoyed success as the third baseman for Conway Christian baseball and as the quarterback of the Eagles’ football team. The junior is a member of Beta Club and Drama Club and enjoys hunting, fishing, playing video games, hanging out with friends and attending Second Baptist Church in Conway.


“No matter what you do, you cannot overlook the classroom,” Wood said. “It’s arguably the most important aspect of the student athlete, in high school and in college. You also have to fall in love with the weight room. If you’re not conditioned, people will run you into the ground. Working hard in the weight room will give you the advantage over your opponents.”