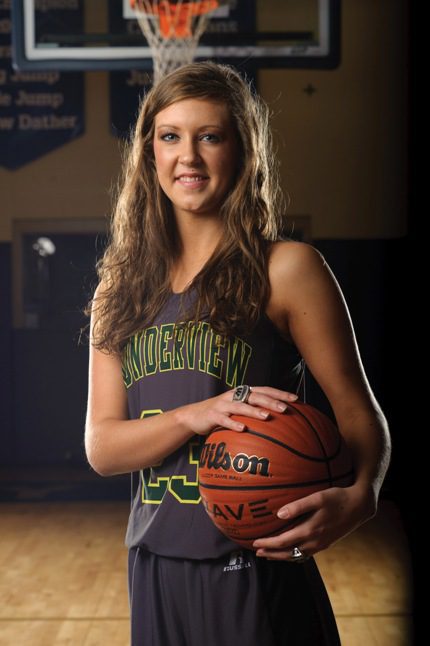 
Ali Harris will not be outworked on the court. This unrivaled work ethic was locally grown on her family’s farm.

“I work on the farm with my dad,” Harris said. “Building fence is my least favorite thing to do. Clipping the fence is the worst part. Cutting firewood ain’t very much fun either. But we have to do it.”


She does what has to be done on the court, too. And she’s not the only Harris girl to sport that attitude at Wonderview. The family has produced several talented basketball players.


“My older sisters are really, really good ball players, and my dad was a really good ball player,” Harris said. “It’s just in our blood to play ball. When I was a freshman, I got to move up and play senior high basketball with my sister. That was the first time Wonderview had ever won state. It was a big mark in our history.


“It was a great experience playing with my sister. It was hard. We would bicker back and forth at each other. Usually we weren’t on the court at the same time, but it was awesome having that experience of getting to play with her. She has a really good attitude. I’ve tried through the years to develop that same attitude and stay positive and make the best out of everything.”


Harris was selected to this year’s 501 Basketball Team — 24 players representing the best the 501 has to offer both on and off the court. Harris was nominated by Wonderview’s head coach, Jeremy Simon.


“Ali’s best quality as a player is her ability to shoot the basketball. She has a quick release and a high arching shot. Her career 3-point percentage is 39 percent, and she made more than 40 percent her junior year. She has also developed her ability to drive and score if opposing defenders close out on her too quick.”


Harris was named to the 2014 All State tournament team and helped Wonderview make it all the way to the state championship game (where they lost to Nemo Vista). Harris has racked up 26 3-pointers in the past two state tournaments.


“I just want to go out there and do my best, try to win another state title, have fun and make memories that will last,” Harris said.


The senior shooting guard is a two-sport athlete at Wonderview. She’s also plays softball and makes the rounds at third base, shortstop and pitcher. Outside of athletics, Harris is also involved with EAST, FBLA, FCA and Beta Club at Wonderview. She also attends Jerusalem Church of Christ.


“Ali is a responsible, smart, hardworking student that does well in the classroom,” Simon said. “She has lived and worked on a farm her whole life and has learned responsibility and hard work.”


Wonderview travels to Guy-Perkins on Friday.