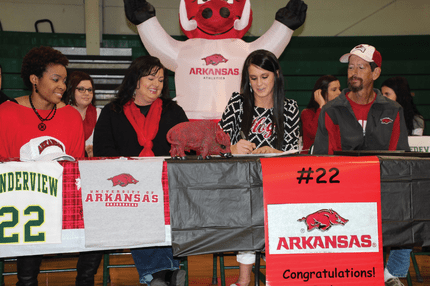 
Bailey Zimmerman’s dream is coming true – she will be an Arkansas Lady Razorback.

The Wonderview High School senior recently made school history – becoming the first student to sign a national letter of intent to play for Coach Jimmy Dykes and the University of Arkansas at Fayetteville on the Division 1 playing field.


Bailey’s family, friends, coaches and the entire student body at Wonderview High School attended her signing ceremony held in the school gym, amid team banners that hung on the walls that displayed her name as well as those of other family members.


“It’s a big deal. It’s exciting. I think my school and community are very proud of me.”


Bailey, 17, has attended school at Wonderview since kindergarten. She previously played softball as well as basketball but decided to focus solely on basketball. “I just love it. I love the game. I love everything about it.”


Bailey said growing up she dreamed of being a Razorback. She considered offers from other schools but “I always wanted to be a Razorback and that was a dream come true.”


Bailey was surrounded at the signing by her parents, Dana and Paul, and her siblings John, Jordan and Brooke. “It’s a great opportunity,” said Dana. “Bailey gets to live her dream and play on the next level. She loves the game.”


Also on hand for the signing ceremony was Conway County Judge Jimmy Hart, who read a proclamation recognizing the player’s outstanding work ethic and community service and naming it “Bailey Zimmerman Day.” He noted that Bailey has consistently achieved honor roll status and has participated in student council, Family, Career and Community Leaders of America, Future Business Leaders of America, EAST, Beta Club, Fellowship of Christian Athletes and 4-H.


Coach Jeremy Simon described Bailey as a versatile, all-around player. “Basically, she does whatever we need for her to do,” he said. “She’ll play almost every position.”


The coach added that Bailey’s signing is important for the school and community. “Even though we’re small, we can produce talent,” he said. “It says a lot for our town…This is an historic event for our school. We are making history here today.”


The coach added that Bailey’s dedication also shows “if you work hard enough, you can make it to this level.”


Assistant coach Robert Edwards said Class A schools don’t always get the respect they deserve. He said it was nice to see someone of Bailey’s caliber get recognition. “I hope her success will help other players.”


LaShanta Johnson, who has been Bailey’s AAU basketball coach for the last three years, described her as a dynamic player on the state and national level. “You definitely have one of the best players in Arkansas.”


Bailey has not decided on a major in college. When asked if she had anything to add, Bailey smiled and said, “Woo, pig sooie!” At the end of the ceremony, Bailey’s signing was capped off with a calling of the hogs by those gathered in the Wonderview gym.


“I’m very blessed that I get to play the game I love at the next level and not just dream about it,” Bailey said. “Some ask me what advice I would give young athletes today. I would tell them to work hard every day at what you love. Be a student of the game and get better every practice and every game. Be better than you were yesterday and live your dreams!”