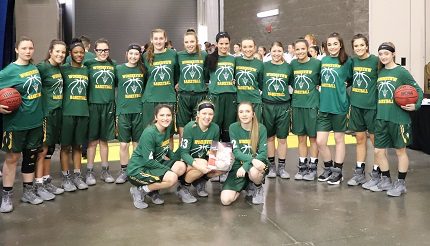 
After falling short in the state finals two out of the last three years, the third time truly was the charm for the Wonderview Lady Daredevils, who defeated Mount Vernon-Enola, 56-40, in the 1A girls’ state championship.

“Last year during the final, we were 0-for-17 from the 3-point line, and that was usually what got our game rolling,” said Shelby Reynolds, a senior post for Wonderview. “This time, our shots fell. So, to see those shots falling boosted our confidence and intensity throughout the game.”


The 3-point shooting didn’t start out pretty for Wonderview — they started 1-of-8 — but a key series of plays in the second quarter turned the tide.


“We had so many shots go in and out in the first half, but we couldn’t seem to get any momentum going,” said Coach Jeremy Simon. “I believe it was around a seven-point lead when (senior) Brooke Zimmerman hit a 3-pointer with two minutes to go in the second quarter. (Junior) Faith Byers made another 3-pointer about a minute later, and we were able to stretch our lead to 13 at half. After starting the game 1-of-8 from the 3-point line, we made six of our last 10 3-point attempts.


“It was great to see us shoot it well from the outside after we struggled so badly last year. It is very difficult to shoot in that arena, especially for small schools who are used to playing in small gyms. Mount Vernon-Enola struggled from the 3-point line. I felt like we did a good job on forcing them to shoot deep shots that were contested.”


Rebounding was another key factor for Wonderview. The Lady Daredevils out-rebounded Mount Vernon-Enola 41-28.


Zimmerman led Wonderview with 19 points. Byers and Reynolds both finished close to a double-double. Byers had 17 points and nine rebounds, and Reynolds had eight points and 12 rebounds.


“Brooke got us going early in the game and played a great first half,” Simon said. “She hit some big shots and made some great passes that assisted her teammates into scoring. Faith did a great job handling the ball for us and also grabbed nine rebounds. Faith also was clutch down the stretch going 7-of-8 from the free throw line in the second half.


“Shelby rebounded the ball as well as I have ever seen. She was all over the place and got us several extra possessions.”


For the seniors — Zimmerman, Reynolds and Breanna Gottsponer — the win erased years of frustrations from losing in the championship game in 2015 and 2017.


“This win means the absolute world to us,” Reynolds said. “It feels unreal that I can actually call myself a state champ, but we did it. This is what we worked so hard for all season, and it is the absolute best way to finish my high school basketball career. We could not be more blessed.”


“It’s hard to put into words what this means to us,” Simon said. “My three seniors played with so much determination during the second half of this season and throughout our post-season run. It is so difficult to make it to the championship game, and after losing in last year’s finals, I did not know if we would ever make it back.


“But these seniors were determined to bring home a state championship before they graduated. I couldn’t be prouder of them.”


With a core of juniors returning, don’t be surprised if Wonderview is right back in the championship mix again next year.


“We will have some big shoes to fill going into next season, but it is good to know that we will have three girls returning who have started for the past two seasons,” Simon said. “It is exciting to think about next year and wondering which girls will step up and take the other two starting spots. I can see it getting very competitive in here between now and next October with players competing for those spots.


“With Faith Byers, Bailey Wright and Kailey Gullett all returning as starters, we should have some great leadership, and I expect them to do great things next season.”