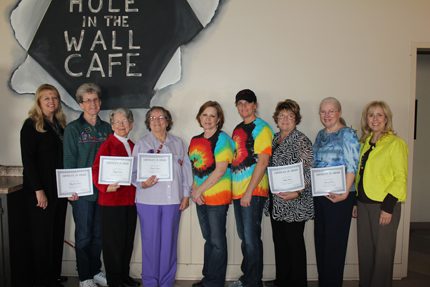 Five winners were named in the Spice of Life recipe contest sponsored by 501 LIFE and The Hole in the Wall Cafe.

The contest gave 501 LIFE readers a unique opportunity to show off their cooking and baking skills. Entries were sought in three categories – entrée, vegetable and dessert.

According to Toni Burrows, co-owner of the restaurant, a lot of great recipes were submitted. The entries were reviewed and a select number were prepared by the staff for judging. She said it was too close to call in the vegetable and dessert categories so there was a tie.

“We want to thank everyone who submitted recipes for the contest,” said 501 LIFE publisher Donna Spears. “There were a lot of tasty dishes, and we’re certain it was a difficult decision.”

Entries were judged on taste, customer appeal and ability to produce the dish in large quantities. Winners received a gift certificate to the restaurant and will see their creations added to the restaurant’s menu after the first of the year.

Norma and her husband, Carmon, are retired and live in Vilonia. She previously worked at the Fred’s Discount Store, when it was located next door to The Hole in the Wall. The couple attends First Baptist Church in Vilonia.

Norma typically cooks by memory and experience, without a recipe. She has won blue ribbons at the Faulkner County Fair for her tomatoes, peas, pickles and cornbread. She said her Corn Casserole dish is a new family favorite. She said those who like the taste of cornbread and corn will like it.

The Varners have four children, nine grandchildren and a great-grandchild. “I enjoy cooking for my family and being together,” she said.

Sherry and her husband, Elvis, moved to Conway from North Little Rock about four and a half years ago.

The Spice of Life recipe contest was the first one Sherry remembers entering. “I’ve been tempted before,” she said. “I love good recipes. I’ve been a recipe collector for years.”

Her dish – Carrot Soufflé – won in the vegetable category. “It doesn’t taste like a carrot dish,” she said. “It tastes more like a sweet potato dish.” She has had the recipe for a long time, and it is a family favorite. “I don’t fix it often enough to suit my husband.”

With Thanksgiving around the corner, Sherry is already planning to prepare some other family favorites – like a sweet potato soufflé with a coconut and pecan topping and corn pudding.

The couple has one son and six grandchildren.

When not cooking, Sherry enjoys gardening and taking care of her flowers. The couple also enjoys attending Central Baptist Church.

Originally from Jacksonville, Mary Lee and Pervis Farris moved to Vilonia in 1971. They have two sons, five grandchildren and two great-grandchildren. They attend Belmont Chapel near Vilonia.

“My mother taught me to cook when I was really young,” she said. “I’ve always enjoyed cooking.”

Mary Lee’s Mexican Casserole – for which she won in the entrée category – and Mexican cornbread are a “must” for family reunions and gatherings. “They’re always gone when I get around to them so I guess everybody likes them pretty good.”

Mary Lee came across the recipe in a pamphlet that was circulated when she worked at Baptist Medical Center some 50 years ago. “I’ve had that recipe so long,” she said. “I’m sure I’ve changed it so much it’s not like the original.”

Mary Lee recently subscribed to 501 LIFE to ensure that she will get a copy every m
onth. “I don’t want to miss any of them.”

Culinary skills obviously run in the family for Debby Harris.

A resident of Pottsville, Debby was motivated to enter the Spice of Life contest while she was visiting her daughter, Amanda, in Ohio. Amanda won a local contest with a recipe titled Pumpkin Crisp. “She won and I thought I’ll enter this one,” Debby said. “We both like to cook.”

This isn’t the first time that Debby or someone in her family has won a recipe contest. The Snicker Bar Pie, which tied in the dessert category, won second place in a contest in Russellville about three years ago. The first place winner was Debby’s grandson, Zander, for his Bacon-wrapped Watermelon Rind.

“We just like to cook and eat,” Debby said of the family’s interest in cooking.

Debby and her husband, Larry, own the Napa stores in Morrilton and Conway. Debby is a registered nurse and has worked for Arkansas Breast Care for 12 years. She serves in a 19-county area that includes several cities in the 501.

Debby said she learned about 501 LIFE when she picked up a copy at a Conway business. Her husband noticed how much she really enjoyed it and subscribed to it for her. “It (501 LIFE) helps keep me up on what is going on as far as events and advertising,” she said.

When asked if there was something in particular she enjoyed preparing, Debby said she likes desserts. “My favorite food group is the white food group – anything with sugar, Eagle Brand milk, flour, pasta or bread.”

In addition, Debby and Larry enjoy grilling and cooking on their Big Green Egg. In fact, they have attended several festivals where other owners prepare dishes and share their techniques and recipes. “Larry does the cooking and I do the prep.”

A collector of recipes, Peggy’s Coconut Cream Cake recipe came from her aunt about 30 years ago. The aunt got the recipe from her church in Jonesboro.

“I’ve been collecting recipes about as long as I’ve been married, which is 43 years,” she said. “I can tell if it is going to taste good by the way they sound.”

Peggy describes the cake as “cool and refreshing and creamy.” She added, “I haven’t had any complaints.” In fact, some who don’t like coconut find that they enjoy the cake, which is made from cream of coconut.

The recipe is “very easy,” according to Peggy, who added that the ingredients and instructions are easy to remember. When Peggy was reviewing the contest criteria, in particular that the dish would be made to serve a large quantity, the cake recipe came to mind. She was both “surprised and pleased” when she learned that she had won.

Peggy and her husband, Charles, have lived in Conway for 12 years. She is retired from the Blytheville School District after teaching 29 years. They attend Grace United Methodist Church in Conway. They have one son and daughter-in-law.

Peggy was appreciative of 501 LIFE and The Hole in the Wall for sponsoring the contest. She said both offer things that are “fresh and wholesome.”

“I know what to expect at both places – something good!”

Spice of Life recipe contest, The Hole in the Wall Cafe