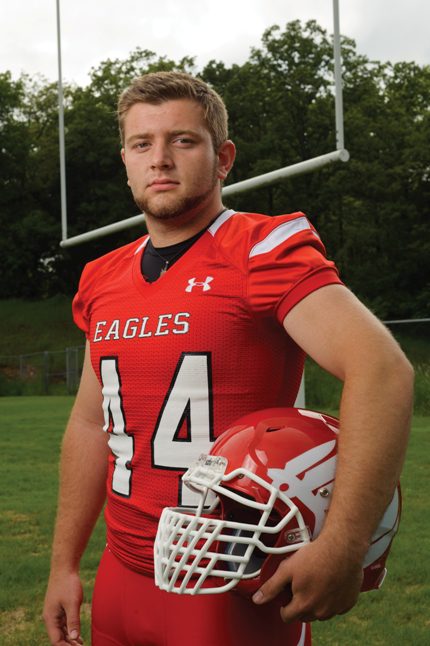 
When it comes to high school football rivalries in Central Arkansas, few manage to live up to the hype that the annual matchup between Greenbrier and Vilonia generates. For the Panthers and Eagles, the Battle for the Judge’s Cup isn’t just a game — it’s a chance for players to cement themselves into Faulkner County football lore.


“It’s rough,” Vilonia senior linebacker and fullback Dylan Wimberly said of the rivalry. “When it comes down to game time, you’re nobody’s friend. This year, the rivalry is stronger than ever — not just because of the teams, but because of who is on the teams. Excitement is high and our adrenaline is pumping. I’ll admit, they beat us down pretty badly last year, but we’re coming for them this year.”


Wimberly was selected to this year’s 501 Football Team — 27 players representing all 11 counties of the 501. The team boasts the best the 501 has to offer both on and off the field. Wimberly was nominated by former Vilonia head coach Jim Stanley.


“Dylan is a great football player and an excellent role model for young students,” Stanley wrote in his nomination. “He is a very kind-hearted individual who is always putting other people first. He is very supportive, encouraging and unselfish, and I believe that he will have a lot of success and is an all-conference and all-state caliber player.”


As 5A West conference play draws to a close, Wimberly and the Eagles prepare for their most-anticipated game of the season, a showdown with Greenbrier — a game whose atmosphere closely mirrors that of a playoff game. To make the match-up even sweeter, each team has the opportunity to end its rival’s season.


“Everybody comes to the game,” Wimberly said. “It’s a blast. No matter where the game is, they shut all the stores down in Vilonia in order to come out and support our school. I’ve never seen anything like it.”


As the Eagles (5-4, 3-3 5A West) prepare for the big game, Wimberly says there’s one moment in the rivalry’s long history that Vilonia uses to motivate itself.


“There’s always one game that the coaches talk about to fire us up,” Wimberly said. “It was 2011, and Greenbrier was incredible. They had Neal Burcham, who was one of the best quarterbacks in Arkansas that year, and we weren’t having a good season. We were projected to lose by a lot. In the game, however, Burcham got injured and we were able to take down the top team in the state. It was one of the greatest games in our school’s history. Even though I wasn’t playing back then, it’s still the game everyone talks about today.”


Though he wasn’t a part of the Eagles’ 2011 victory over Greenbrier, Wimberly recalls a rivalry moment equally as special for the senior.


“One of my favorite football memories actually involves Greenbrier,” Wimberly said. “In seventh grade, against the Panthers, it was late in the game and we were down by quite a bit. Our coach called a timeout and gave us a pep talk and got our heads back in the game. It was like something out of the movies — after that pep talk, we went back into the game and came back and won. It’s something I’ll never forget.”


Entering the last leg of his senior season, Wimberly says that his time spent on the field is unlike anything else he’s ever experienced.


“Football means a lot to me,” Wimberly said. “I really want to make sure that I go out on top with my team. I’ve been with most of my teammates since sixth grade when I moved here, and I want to get as close as I can to them and win out.”


Off the field, Wimberly is involved in Fellowship of Christian Athletes and Christian Club at Vilonia.


“My faith is really strong,” Wimberly said. “I’m active in many church activities and participate in Outreach Ministries. We set up a food drive this year and ended up giving out 20 tons of food to kids in our community. It was really awesome.”


“Dylan is always helping others,” Stanley said. “He is very involved in youth programs at his church, has helped coach special Olympic students and even volunteers with our pee wee programs.”


In addition to football, Wimberly also plays tennis at Vilonia.


“Football season is only during a certain part of the year, and I have to stay in shape,” Wimberly said. “I love tennis. It’s very competitive and, honestly, it’s just a blast getting to go around and play tournaments with your friends.”


After high school, Wimberly plans to trade his Eagles uniform for a college football jersey.


“I’ve had the privilege to participate in the U.S. Army All American Bowl as one of the top 500 Players in the Nation,” Wimberly said. “I really want to play college football and going there really helped open the door for me. Now, many colleges are looking at me for a potential football scholarship, and I’m pretty excited about that.”