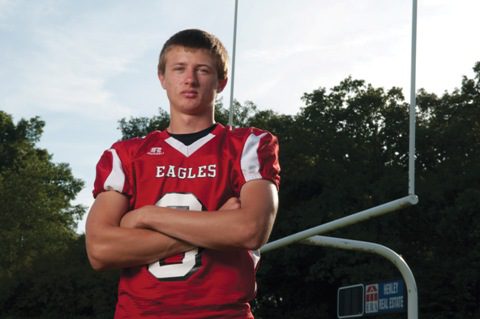 
Vilonia junior quarterback Jared Willis remembers last year’s game against Greenbrier all too well. At halftime, Willis’ Eagles led the Panthers, 28-21, but in the third quarter, the wind was swept from the wings of Vilonia.

“I threw a couple of key interceptions, and our defense couldn’t keep up,” Willis said. “I got knocked out of the game in the third quarter with a concussion and had to watch from the sidelines.”


Greenbrier reclaimed the First Service Cup with a 48-35 win.


On Nov. 7, Willis and the Eagles look to avenge last year’s loss as the rivalry game comes to Vilonia. The victory has gone to the home team the last two years. Vilonia enters this final game holding a 3-6 (3-3) record. With a win over Greenbrier, the Eagles will take the fourth and final playoff spot out of the 5A West


“I’ve been looking forward to playing against Greenbrier again,” Willis said. “The atmosphere is definitely intense. The players play their hardest for this game. Last year, I think we could have had them. [Greenbrier] can never be overlooked.”


Willis was nominated by Coach Jim Stanley and selected for this year’s 501 Football Team.


“Jared is the best quarterback I’ve ever coached, and I believe he will make a name for himself this year,” Stanley said. “He’s always the first one on the field and the last one off. He has a great work ethic and leadership qualities.”


“We should be pretty good,” Willis said of the match-up against Greenbrier. “Our goal is to play fast, but control the clock. We just have to get after it and not let them control us. We have a lot more experience this year. We just have to play like we’re supposed to play.”


Willis, who took over the Eagles’ quarterback duties late last season, set several school passing records in just three games as the starting quarterback. Willis also runs track for Vilonia and often can be found playing pickup football and basketball with his friends on the weekends. In the classroom, Willis is a member of Beta Club and hopes to graduate with honors.


“Off the field, Jared has the same work ethic and leadership,” Stanley said. “He is a straight-A student and is very caring to everyone in the classroom. He was student of the year as a freshman. He is a great young man on and off the field.”