He works as a zookeeper at the Little Rock Zoo, and since he got started in the business in 1995, he has worked with a wide range of animals. He has truly found something he is passionate about in his career.

Dad’s love of animals goes back to his childhood, but when it came to choosing a career, being a zookeeper never entered his mind. He got a degree in electronics technology and worked in IT from 1979-94.

“When I worked with electronics, when I walked into a situation, I did repair or teaching,” he said. “It was a negative situation every time. Something was broken. People were mad. I got to play the good guy. I got to fix it. It’s the same thing with animals. I get to play the good guy. I bring them something to eat. I make sure they’re cared for as far as food, water, shelter. I look at them to see if they exhibit signs of sickness. To do that, you have to know the animal. It’s like knowing if a baby is sick.”

“I would watch him train the dogs. If it was a puppy, he took more time. If the dog was a little older, he took the appropriate time. I was learning all this and didn’t even know it. As time went on, it was a natural thing – the dog would do what I wanted it to do.”

This experience translated into his career in zookeeping.

“The teaching process is the same, whether it’s an elephant or a zebra. There’s a way to get to them, as long as you don’t panic. You have to read the animal.”

My dad’s first job in zookeeping was with elephants at the Jackson Zoo in Jackson, Miss.

“I answered an ad in the paper that said, ‘Wanted: Elephant handler.’ I knew that was as far away from electronics as I could get,” he said. “The pay was not exactly what it was in IT, but there was something greatly satisfying about what I do.”

He came to really enjoy working with elephants, which are one of the most intelligent animals.

“An elephant is very food-oriented,” he said. “If you give them something they like, they will remember it and reward you with the correct behavior.”

He said while apples, sugar cubes and M&Ms all worked well, Tic Tacs worked wonders. He could shake the box to let the elephant know he had the treat, and the elephant would actually enjoy the mint at length because of its powerful flavor.

“They’ll follow you anywhere for a Tic Tac,” he said.

In 1997, my dad first came to work at the Little Rock Zoo. At that time he got the chance to work with bears, which he liked almost as much as elephants. He has worked with every kind of bear except the giant panda and the polar bear.

He said captive bears are a little like very large dogs.

“You can shame them like a dog, and they’ll cower. Wild-caught bears are smarter, quicker to pick up on things than a captive bear.”

He said the grizzly bears at the Little Rock Zoo are both wild-caught and captive. 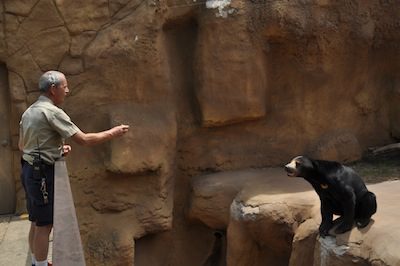 Although he never worked directly with them, my dad very much likes orangutans, too, because they are the smartest of the great apes. He had a friend at the Jackson Zoo who worked with the orangutans. He said there was a female who used to make things out of rope.

“They’re very smart. They’re planning all the time. How to get out, how to get something else to eat,” he said.

Zookeeping, as you might expect, is not without dangers. In my dad’s first job at the Jackson Zoo he worked with elephants, Cape buffalo, rhinos and zebra. “They’ll all kill you.”

In addition to continually learning about different animals, zookeepers have opportunities to learn from one another. They may visit other zoos to learn different practices, for example.

A few years ago, my dad presented a paper with two other zookeepers to the Association of Zoos and Aquariums Bear Taxon Advisory Group. They presented their findings that bears born in captivity are better suited if they are raised by their parent than by humans. The paper won first place.

My dad repeatedly points out that caring for animals is like caring for a baby because the animal cannot tell him what it needs.

Maybe it’s all those years of training bird dogs along with his father, or maybe he was just born with it.

It’s clear that working with animals every day brings my dad joy and fulfillment. I think the only thing he regrets about his career choice is not finding it earlier.