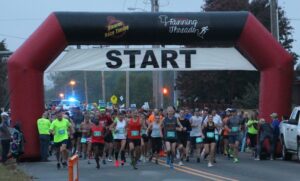 The weather was perfect for the 11th Annual Soaring Wings Half Marathon and 10K held Oct. 20 in Conway.

The event benefits Soaring Wings Ranch, a Christian organization that has two homes for girls and one for boys and one home for infants and toddlers.

“It was a great day,” said Amanda. “We had optimal running weather – cool and crisp at the start. This was the coolest year we’ve had since 2013 and it was evident in the finish times. There were so many PRs (personal records) and goals met.”

This year’s event was dedicated in memory and in celebration of Steve Zimmer – someone who always went the extra mile for others. This year’s theme, #GoTheExtraMile, was a tribute to Steve.

The overall winner of the half marathon and the first female was Tia Stone with a time of 1:25:42, a personal course record. Karl Lenser was the first male at 1:27:57.

The overall winner of the 10K and the first male was Trey Turner with a time of 38:20. Linnae Magyar was the first female at 44:52.

“We want to say a big thank you to our title sponsors: TLC Pediatrics, PLLC, half marathon sponsor as well as the sponsor for Kids Run for Kids; and Incite Rehab and Reliance, 10K sponsor and the sponsor for the Family Fun Zone after the race.”

Between race participants, volunteers and spectators, an estimated 2,500 converged on the McGee Center, where the races started and ended. The event drew participants from throughout Arkansas as well as other states – Texas, Missouri, Tennessee, Mississippi, Oklahoma, Louisiana, Kentucky, Arizona, Wisconsin, Colorado and Nebraska. Amanda noted there was even a participant from Saudi Arabia.

No major problems were reported along the race course. “We have received such great feedback from participants regarding the volunteers, course, pacers, organization, medals and race gear,” said Amanda.

Renee Rader was the top fundraiser in the Winged Warrior program, collecting more than $1,500. In all, Winged Warriors raised nearly $15,000 for the children of Soaring Wings Ranch.

Official results can be found at stearnsracetiming.com/soaring-wings-18.html. Race photos are available at runbikeswimphotos.com and a portion of every purchase is donated to Soaring Wings. “Thank you, Marvin Winston and your team at Run Bike Swim Photos for always taking the best race pictures and for your support of the children at Soaring Wings!”

For those who placed in their category but they were unable to attend the awards ceremony, awards are available to be picked up at The Sporty Runner at 1016 Van Ronkle St. in Downtown Conway. The awards will be available for two weeks.

Next year’s event is scheduled for Saturday, Oct. 19.

Amanda expressed her appreciation to sponsors, participants and the volunteers involved in this year’s race. “The Soaring Wings Half Marathon and 10K is a huge event with so many moving parts – it is amazing to watch it all come together on race day! It wouldn’t be possible without all the volunteers, sponsors and participants,” she said. “Also, we can’t thank the Conway Police Department enough for keeping our participants safe at headquarters and throughout the course.”