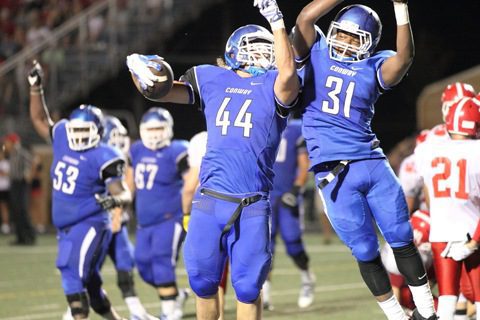 The Wampus Cats prevailed during a late push by Cabot, outlasting the Panthers, 24-22.


Both teams entered 2014 off tremendously successful campaigns in 2013. Cabot made it all the way to the 7A championship game last fall, and the Wampus Cats finished just one step behind in the 7A semi-finals.


“It was important to win at home for sure to start the season,” said Jeff Matthews, play-by-play announcer for the Wampus Cats on Conway Corporation Channel 5 Sports. “They have to take care of business at home, and they did that.”


The Wampus Cats didn’t have their normal number of plays on offense, which can happen against Cabot, who likes to control the clock offensively. But when Conway did have the ball, they were very efficient.


“I think we assumed the Wampus Cats were two deep at running back, but that changed for sure,” Matthews said. “We were impressed with Mark Odom, the third back. He ran as hard as Kevin Chamorro and Karlil Johnson did. That was a nice surprise.


“I loved the game [receiver] DJ Johnson had. He is such a good deep threat, and when Breylin Smith finds him in single coverage, I think they could hook up like that often this year.”


The Wampus Cats’ first score of the season came on a 35-yard strike from Smith to Johnson in the first quarter. The pair connected again late in the second quarter on a 38-yard touchdown reception.


Defensively, the Cats had some new faces, but overall did enough to win against a tricky Cabot offense.


“JJ Jackson and Nick Starr stood out starting their first varsity games,” Matthews said. “Cabot is so difficult to prepare for, and you never know how a guy is going to react to Friday nights. They both handled it like seasoned veterans.”


Cabot is much younger at some key positions this year than they were a year ago in their run to the 7A championship game. Jarrod Barnes starts as a sophomore at quarterback.


“Barnes was as good as advertised,” Matthews said. “In Conway we are familiar with high expectations on a sophomore quarterback at the state’s highest level. They are dealing with that now in Cabot, and it sure seems like he is legit.”


The Wampus Cats will be at home again this Friday, playing host to Jonesboro at 7 p.m.


“Of course you want to win, but beyond that, it’s all about getting better and staying healthy,” Matthews said. “It will be a completely different looking team to prepare for defensively. Jonesboro is athletic and will spread the field. This is a great non-conference schedule to get prepared for the conference slate.”