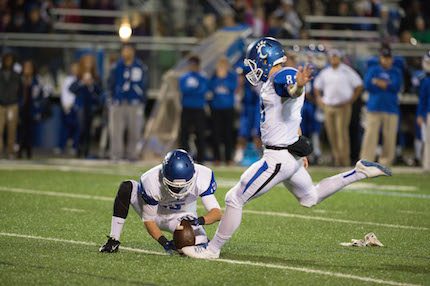 
After earning a first-round bye in the 7A playoffs, the Conway Wampus Cats are set to play host to Fayetteville this week in the quarterfinals.


Conway should be well rested heading into what could be an instant classic with Fayetteville.

“That’s always hard to tell [about the bye week],” said Jeff Matthews, play-by-play announcer for Wampus Cat Football on Conway Corporation Channel 5. “The week off is always nice. All of these teams have been at it every week, without a break, since the summer. Because of that, it’s always nice to have a few extra days to heal some injuries and to start preparing for your next opponent.”


The Wampus Cats are still riding high off of their perfect regular season and 7A Central crown, but Fayetteville will be more than a formidable foe here in the quarterfinals.

“They are as talented as always with two players who have committed to play college football up the road for the Razorbacks,” Matthews said. “CJ O’Grady is a 6-foot-5, 230-pound tight end who will be someone they look to to move the chains when in need of a first down. The other future Hog is Dre Greenlaw who is one of the better defensive players in the state, but last week Darryl Patton, the head coach for Fayetteville, started to get him involved more offensively and it worked. Greenlaw had a hand in their first three touchdowns against Cabot.”


Fayetteville hosted Cabot in the first round, taking the win easily, 35-14. The Conway offense will have to put points on the board early and often to keep up with a high-powered Fayetteville scoring attack.

“I think most everyone would agree that the running game is pretty important,” Matthews said. “Kevin Chamorro is the best running back in the state that I’ve seen, and I would trust him with the ball on every play, even though the Cats don’t have to rely on that. Mark Odom is a great option to give Kevin a break, and they will be needed to control the clock and move the ball. Of course the big play possibilities between Breylin Smith and all of the receivers will be needed to keep Fayetteville honest and not put everyone up front.”


Conway’s defense is coming off probably its best performance of the year at Bryant. Conway gave up just 10 points to the Hornets, who entered the Week 10 matchup undefeated. The Cats’ defense seems to be playing its best football at the right time.

“The defense is probably the key to the game,” Matthews said. “Fayetteville is talented, and they are coming off a game last week where they did put points on the board, and the game before that, they put two points on the board and turned the ball over often. If Conway’s defense puts pressure on them, stays home, plays with passion and feeds off the crowd, I think they can keep them in check.”

With a trip to the semi-finals on the line, Conway will rely on its upperclassmen to take them to Black Friday.

“Breylin has to lead well for sure,” Matthews said. “He is the leader and will need to show the confidence that he always plays with, even if the Cats find themselves down. They have trailed in many games this year and fought back. The offensive line will need to control the line of scrimmage for sure.


“Honestly, at this point of the season, it’s all hands on deck for big games. Everyone on defense is going to have to have big games. The kicking game is terribly important. Matt Cummins is such a weapon — from kickoffs into the end zone to field goals. Grant Ellis will be called on to turn the field over, too, when the Cats have to punt.”


In conjunction with the game, the Conway School District is hosting a toy drive to benefit the Caring Cats Angel Paws Program. New or gently used toys can be donated at the game or the athletic office this week. Examples of needs include books, dolls, electronic games, hoodies, shampoo, gloves, hats and socks.