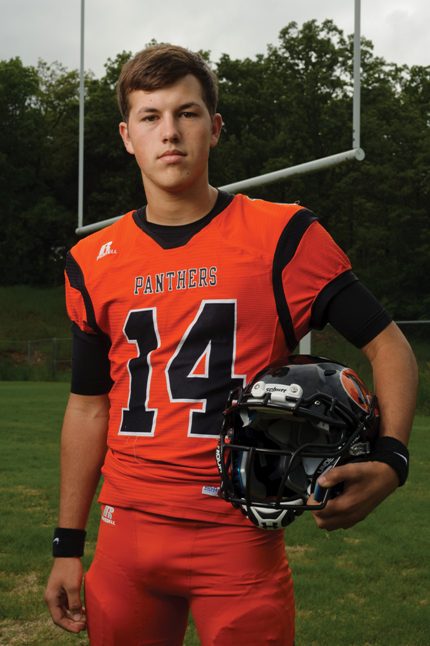 
After dropping their first five games of the season, the Magnet Cove Panthers have clawed their way back into playoff contention, winning three straight going into this week’s showdown against Conway Christian. While a trip to the Class 2A playoffs has been all but secured, senior quarterback Harrison Wade says there’s still much work to be done.


“We’ve grown as a team this year,” Wade said. “When the season began, we were young and inexperienced. We had just gotten a new coach, and we were still getting our offense and defense together. Since then, we’ve come together as a whole and we’ve realized that we have what it takes to finish strong.”


Wade was selected to this year’s 501 Football Team — 27 players representing all 11 counties of the 501. The team boasts the best the 501 has to offer both on and off the field. Wade was nominated by former Magnet Cove head coach Ronnie Efird.


“Harrison has great leadership and takes charge of the huddle,” Efird said. “He’s the type of guy who helps opposing players off the ground. Players trust and respect him. He has great intensity and plays hard every play.”


Wade, whose older brother, Pearson, was named to the 501 Football Team in 2013, was excited to receive the honor.


“I was stoked that Coach Efird nominated me,” Wade said. “It really excited me. I remember getting a text message during school telling me that I was selected. I was so happy. It’s the best feeling to be chosen for something like this.”


With just two games remaining in the 2015 regular season, the Panthers face a tough test — taking down conference-rival Conway Christian. For Magnet Cove, it’s not only a rivalry game, but senior night as well — a game that is sure to be an emotional one for Wade and the Panthers.


“It’s bittersweet,” Wade said. “We all know that this could be the last time we ever play on our home field. We’re going to play our hearts out, and I think it’ll be a night where we draw every single person in town to the stadium. Conway Christian is a good, tough team. They pass the ball well and have a good quarterback. But I believe that we’ve gotten much better and match up with them well. This Friday night, we’ll be the most prepared that we’ve been all season.”


As the Panthers look ahead to the Class 2A playoffs, Wade remains confident that with a little encouragement from the coaching staff, the Panthers have what it takes to make a deep run.


“[First-year head coach Jason Golden] is the coach we’ve never had before,” Wade said. “When he’s not watching film, he’s studying every other team — he pours his life into football for us. He’s our biggest supporter. There’s no team out there that’s far-and-away the best that Class 2A has to offer. We still have the opportunity to make a deep run, and it’s all about how well we put our stuff together going into the playoffs. That’s what we’re working on over the next two weeks.”


Off the field, the multi-sport Wade plays basketball, golf, baseball and track and field for Magnet Cove. In the classroom, Wade maintains a 3.3 GPA and is active in FBLA and EAST lab.


“Harrison leads by example,” Efird said. “He acts right in the classroom, does his work and helps his fellow classmates. He is always willing to go out of his way for someone and be an encourager for them.”


Wade was recently named one of Wendy’s 2015 High School Heisman winners, which awards proven leaders and role models within their school and community. After high school, the senior hopes to play football for Arkansas Tech University in Russellville.