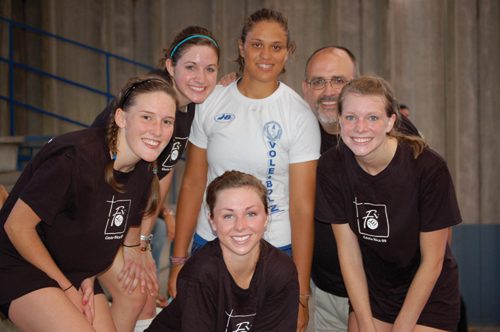 “There are 6 billion people in the world, and half of them are affected by sports at some point in their lives,” McFatrich said. “Why not use sports to break down barriers and share Christ? I had talked to several ministries about piggy backing and using their expertise, but it never turned out right. I talked to Athletes in Action, a sports ministry, in 2008 at the NCAA volleyball Final Four in Omaha, but it just wouldn’t work. I was bummed out.

“I walked away from their booth and 20 feet away there was a huge display for Costa Rica sports tours. I sat down and talked with them. They had done 400 soccer tours in 13 years, but they had never done volleyball. I told them we were interested, but that there was a catch – we wanted to share Christ. They said we could.

“I went from dejection to elation in a matter of minutes. The answer was literally 20 feet away. God had a plan.”
McFatrich assembled a diverse team of athletes. Three players were former UCA Sugar Bears, two came from Ouachita Baptist University and two other players came from McFatrich’s Jr. Olympic volleyball club, Fatchmo Volley. The team toured Costa Rica last June, playing several matches and sharing personal testimonies with opponents.

“From a volleyball standpoint, we had a really successful trip,” McFatrich said. “We lost two matches, and our overall games record was 13-5. Our goal before we even left was to get a chance to play the Costa Rican national team, but there was just no way the No. 20 team in the world was going to play a team they had no idea about.

“After our first three days on the tour, we were 8-0. We got a call on the fourth day that a representative from the national team had been watching us and wanted to play us. We set it up to play five games no matter what. We only won one game, but it was still a great experience for our girls to play such a talented team. The really neat thing was that after the match, we got to share our testimonies with these world-class athletes.”
Emily Gordon, a former Sugar Bear and current assistant volleyball coach at Central Baptist College, was a player on McFatrich’s trip. Gordon had been on mission trips before, but a sports mission trip was uncharted territory.

“We would always share our testimonies with the opposing players after a match,” Gordon said. “Even though you don’t have any idea who these people are, you feel like you have a special connection with them because you share a common bond – volleyball.

“It makes it easier sharing your feelings about God. Some people can be nervous about sharing such an intimate thing, but having that bond with other people makes it easier.”

The team also spent time with Costa Rican children during the trip.

“We were kind of nervous because we didn’t really know what we were doing,” Gordon said. “We went to a children’s shelter, and it was basically a school for kids that have a terrible home life. They were really excited when we showed up.

“It was amazing. Most of these kids had never seen anyone try to help them or teach them. We just played with them all day and just loved on them.”

Based on the success in Costa Rica, McFatrich is looking to continue volleyball mission trips in the years to come.

“Ultimately we want to take annual trips,” McFatrich said. “We are looking at an opportunity to go to China next year. We’ll go anywhere that we can share Christ. It’s important for me to share Christ – it is part of my responsibility as a Christian. The easy way to do that is to use something I’m passionate about.