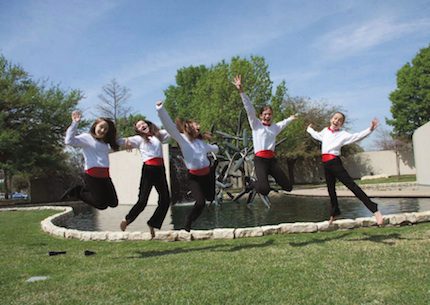 18 Nov VOCA to perform in NYC


The youth choir group Voices of Central Arkansas has been invited to perform at Carnegie Hall in New York City on Sunday, March 30.


VOCA is under the musical direction of Dr. Sheri Cook-Cunningham and assistant director Dr. Paige Rose.

“VOCA gives students a chance to work with other people who all want to sing and who truly want to participate,” Cook-Cunningham said. “Tuition is $100 per semester, and this includes the student’s music, books, folders and uniforms. There are two semesters per year.”


Members of VOCA range from fourth- through 12th-grade students. The choir includes more than 65 members this semester, chosen through an audition process.


The VOCA group was selected to travel to New York based on its qualifying performance last year at the Dallas Heritage Choral Festival. “It is a great honor and experience for these students to be able to perform with Rollo Dilworth, who is a famous conductor,” Rose said.


The group was previously known as the Central Arkansas Children’s Choir, when its members went through eighth grade, but now that it has been expanded to ninth through 12th grades, its name was changed to more accurately reflect all age groups.
The three branches of VOCA include the Youth Choir, the Choristers and Children’s Choir.


Children’s Choir and the Choristers practice for 90 minutes each week. Youth Choir practices for one hour. The practices for each group are held every Monday at Snow Fine Arts Recital Hall at the University of Central Arkansas.


Although the students pay semester tuition, they are seeking additional funding for their trip to New York. Many fundraising events are currently under way.


“We like to have the students participate in events that are relevant to music and their craft,” Rose said. “On (Sunday) Nov. 24, VOCA will perform in the lobby of Robinson Center Music Hall (in Little Rock) before the Moscow Ballet begins. The students are selling tickets to the Moscow Ballet as a fundraiser, and a percentage of their sales will benefit VOCA.”


On Saturday, Dec. 7, VOCA will perform with the Conway Symphony Orchestra at Reynolds Performance Hall, at UCA. Its fall concert will be Monday, Dec. 9, in the Snow Fine Arts Recital Hall. A silent auction will be held during the fall concert.

Proceeds will go toward transportation to New York. VOCA will share the stage with the Conway Men’s Chorus on Tuesday, Dec. 10, at Reynolds Performance Hall.


“We want to thank everyone who has supported VOCA in any way,” Rose said. “Any contribution is greatly appreciated.”


For more information about VOCA and how to get involved, visit centralarkansaschildrenschoir.weebly.com. To make a donation to VOCA, visit gofundme.com/4ejt2k.