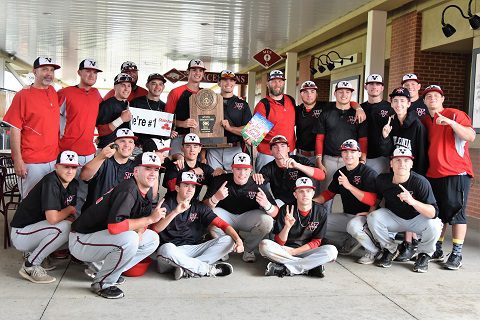 
With a little bit of luck and a lot of hard work, Vilonia earned the Class 5A state baseball championship in May — the team’s first in 18 years.


“This was a team that relied on the comradery between each other to get the job done,” said Coach Brad Wallace. “They wanted to win games — not just to win, but so they could continue playing together as a team for one more day.”

With a combination of aggressive hitting and base-running, the Eagles (25-11) found a way to turn heads in a year where the team was projected to underperform.


“For most of the year, we were considered underdogs,” Wallace said. “Before the season began, we were picked to finish low in our conference and weren’t picked to have a great year. In almost every game this year, it felt like we were always playing from behind. Despite being underdogs, it was the kind of challenge our kids wanted because they never felt like underdogs. We are a very good hitting ballclub that doesn’t get the recognition we deserve. I feel like we proved that this year.”


Being off the radar fueled the Eagles’ drive for success.


“At times this season, things orchestrated like a storybook,” Wallace said. “In one game, we hit back-to-back home runs to tie a game. In the last week of the season, we hit a walk-off home run to defeat Greenbrier. That’s when I looked at Coach Justin Moore and said, ‘These guys don’t believe they can lose.’ All year long, this team took the field and showed that they work and play harder than anyone else.”


Late in the season, the team found a good luck charm in the unlikeliest of places. During a game at rival Greenbrier, the team found a turtle inside of their dugout. The turtle — which the team named Franklin — became a mascot of sorts for the Eagles and accompanied the team throughout the state tournament.


“Baseball is about the kids,” Wallace said. “We had thrown around the idea of getting a team dog this season, but finding the turtle in Greenbrier ended up being really great for us. When they found the turtle, they teamed up to take care of it — finding a container, water and grass for it. And when we won, the kids felt like it was because of the turtle. When you can revert to being 6 years old when you’re playing, it’s going to make you more relaxed and make the game more fun. It helped some of our kids who couldn’t contribute on the field but gave them a way to get involved.”


In the state tournament, Vilonia notched three impressive victories, including back-to-back extra-innings wins against White Hall and Little Rock Christian, to earn a trip to the title game. For the Eagles, it was just another chapter in their Cinderella story of a season.


“When we went to Fayetteville for the state championship game, we went prepared to win it all,” Wallace said. “Our kids were in their rooms every night and woke up early each day. It was business as usual for them. All they wanted to do was play ball together as a team one more time. They were so focused on that that they weren’t even nervous about playing on the big stage. That impressed me as a coach.”


In the championship game, Vilonia jumped out to a hot start against Magnolia (27-2) and cruised to a 9-2 victory at Baum Stadium.


“As coaches, we were impressed by the team’s dedication to the process,” said Assistant Coach Justin Moore. “Our older guys understood what was at stake and didn’t let the pressure bother them. In the middle of the game, you could sit back and watch them play and see how much fun they were having. They embraced the moment and enjoyed it.”


After winning it all, the Eagles celebrated their victory in a unique way.


“As soon as we got on the bus, the first thing we did was drive to a pond behind the stadium to let the turtle go,” Moore said. “Then, we got on the bus and drove to Alma to eat ice cream. We’re a strange bunch of guys, but it’s the little things that made this year so special for us.”


“As a coach, you must enjoy that kind of stuff,” Wallace said. “It was something that allowed them to break away from the challenges of the game and be 6 years old again. That fits my persona. When we win games, we play the Pirates of the Caribbean song on a portable boom box. For us, it’s all about having fun and having a good time together as a team.”


Wallace says the win only brings a strong community closer together.


“Our school is the center of our town, and we’re producing something we’re proud of,” Wallace said. “Our kids are putting in the hard work, and the support of our community has been incredible. And it hasn’t been just this year. For the nine years that I’ve been here, this community has always found ways to get involved. From providing meals to the kids to holding fundraisers to help our kids with supplies and apparel, it’s been amazing to have all their support, and it’s exciting to bring them a championship.”


Finishing their careers on top, seniors Chris Bass and Nick Howard will continue their baseball careers together at Oklahoma Wesleyan University.


“Chris and Nick will be our third and fourth players we’ve sent to Oklahoma Wesleyan,” Wallace said. “This year, those two players created a persona amongst themselves that helped everyone else on our team be successful and will inspire the next class of seniors.”


With the spoils of victory behind them, the Eagles are already planning their 2018 campaign.


“Each day at the ballpark, we bring the ‘practice hard, play harder’ concept,” Wallace said. “The biggest challenge for these kids will be to keep the chip on their shoulder and return to the mentality of being underdogs, no matter what happened to us this year. This is a new team now, with a new group of seniors, and we are already looking to define our persona for next year.”