Christian Gardner signed to play football for Bacone College in Muskogee, Okla., and Whitney Marr will play volleyball for Lyon College in Batesville. 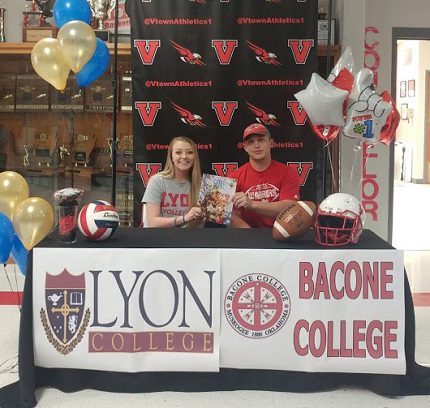 Vilonia High School students Whitney Marr and Christian Gardner were “Loving LIFE” as they signed letters to play on the college level.

A daughter of Alicia and Todd Prater, Whitney has attended school in Vilonia her entire life.

“I’ve played volleyball since the seventh grade with Coach Copeland,” said Whitney. “I play libero or as a (DS) defensive specialist.” 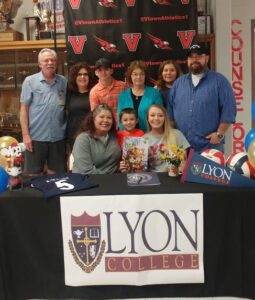 Whitney Marr was surrounded by family and friends as she signed to play volleyball at Lyon College.

A former track team member, she pole vaulted until she decided to dedicate all of her time to volleyball.

Whitney said she enjoys most getting to know all of the other players and “expressing myself through the vigorous activity.”

Whitney, who is on the All A’s Honor Roll, received the Eagle Award and was recognized for the most digs in 2017.

At Lyon College, she plans to major in psychology. “I wish to graduate college and find a career as a psychologist, where I can talk to patients and help them with their life issues.”

Whitney is appreciative of her coaches. “I would love to thank all of my coaches that have helped me reach one of my goals to play college ball. One in particular would be my nationals coach – Emily Gordon.”

A son of Jaime Davidson and Scott Gardner, Christian has attended school in Vilonia since the sixth grade. 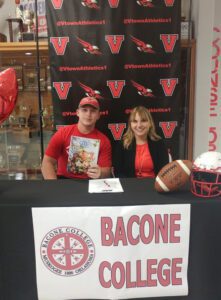 Christian has played defensive end for the Vilonia Eagles. He began playing in fourth grade. He enjoys most the camaraderie among his teammates. “I like the brotherhood, getting to go out every week with guys that you have been through so much with and knowing that the guy next to you won´t let you down.”

In addition to football, Christian throws shot put in track.

Christian plans to major in physical education in college to become a coach.

“I would like to thank one man more than the rest, Coach Steward, my position coach and good friend.”