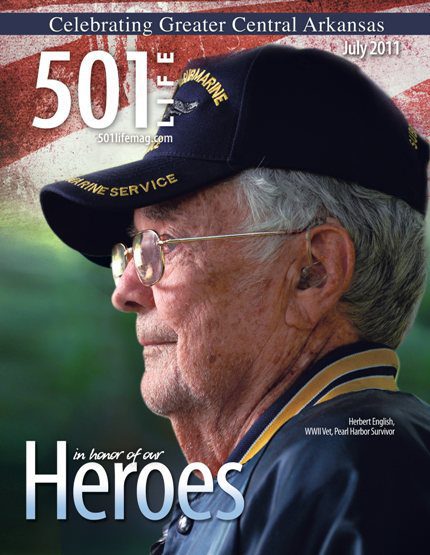 Pearl Harbor veteran Herbert E. English, who was featured on the cover of the July 2011 “Heroes” edition of 501 LIFE, has passed away.


“It was a tremendous honor to share his story with our readers,” said Sonja J. Keith, editor and co-publisher of 501 LIFE. “We extend our heartfelt condolences to his family and friends.”


Donna Lampkin Stephens interviewed English, who was living at Plumerville at the time, about his military service for the “Heroes” issue but he stopped short of calling himself a hero. “My heroes are the ones that were killed,” he said in the story. “Those are the real heroes. I feel very thankful that I was assigned to people who were real qualified for the job they were doing. Maybe somebody above was looking down.” (To read the entire story, click here.)


Being raised on a farm, Herbert had no desire to be a farmer. Looking for adventure, he enlisted in the Navy on Dec. 17, 1939. After training, he was assigned to the USS Idaho in Pearl Harbor. Working in the engine room and sleeping in hammocks, conditions were less than ideal. After leaving Hawaii for the East Coast, Herbert was re-assigned at the USS Solace and was headed back for his second tour of duty at Pearl Harbor.


Two years to the day after his enlistment, Herbert witnessed the Japanese attack on Pearl Harbor. Surviving the attack, Herbert was later transferred to the USS J. Franklin Bell in Alaska, then to submarine duty aboard the USS Trigger-headed back to Pearl Harbor, his third and final stay. After a few more assignments and the end of the war, Herbert left the Navy.


After a few months off, Herbert re-enlisted in the Air Force. He served at several bases stateside along with Puerto Rico and Bitburg, Germany. Herbert ended his military career upon his retirement from the Air Force on Jan. 30, 1960. Following his military career, he attended barber college and retired from that career as well.


Herbert was a member of Pearl Harbor Survivors, Disabled American Veterans, Veterans of Foreign Wars-American Legion and the Masonic Lodge #38 in Norman, Okla.; he was of the Methodist faith.


Herbert is survived by numerous nieces and nephews.


Graveside services with military honors were held Dec. 19 at Roselawn Cemetery under the direction of Edwards Funeral Home in Fort Smith.