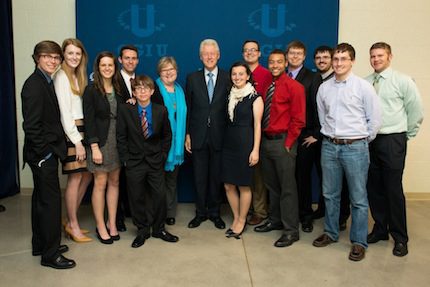 The University of Arkansas recently sent five teams of students to the sixth meeting of President Clinton’s Global Initiative University at Washington University in St. Louis. In all, five U of A teams totaling 12 students were invited to participate.

“While we all pay attention to great student athletes during March Madness, our CGI University Commitments Challenge celebrates great student ideas to address some of the world’s most pressing issues,” said President Bill Clinton. “Whether empowering poor families in Nepal to start their own fish farms, launching an annual event for disability rights, or securing engineering apprenticeships for students who’ve dropped out of high school in Kenya, these 16 new CGIU Commitments to Action in our ‘bracket’ competition reflect the passion, potential and problem-solving skills of our next generation of leaders.”


This is the first year that the University of Arkansas has been a member of the Clinton Global Initiative Network Partnership Program for Universities.


More than 1,000 college students were selected this year to address the most pressing challenges facing their campuses and communities in areas such as education, environment and climate change, human rights, poverty alleviation and public health. Each team brought a proposal to demonstrate for the Clinton Global Initiative University. More than $400,000 in seed money funding will be distributed among the teams, based on their projects and need. A network of 33 colleges and universities will work with the student innovators and entrepreneurs to realize their projects.


“The schools that have joined the CGI University Network are supporting student commitment-makers to create positive change across the globe,” said Clinton.


Rachael Pellegrino, Brandon Mathews and Nathan Falls along with Caroline Daniel drew upon their experience with the Full Circle Campus Food Pantry at the U of A to propose a “National Campus Pantry Coalition” to serve as a network, resource and knowledge center for campuses that want to start and operate their own food pantries. The project was awarded $1,465 in seed money.


Cody LaBarber, Jake Pitts, Courtney Hill and Zach Bever made a commitment to bring clean water to the community of More Tomorrow, in Belize. Hill committed to build a water tower that will provide clean water to the village of More Tomorrow, Belize, by the end of the year. After construction is complete, they will train the local residents to properly use and maintain the tower.  The “Water Tower Construction and Clean Water Education in More Tomorrow, Belize Commitment” proposal was awarded $2,860 by the Clinton Global Initiative University.


University of Arkansas junior Stewart Pence proposed a recycling project for Greek organizations called “Greeks Go Green.” His idea is to encourage Greek houses to use their own resources, specifically manpower and vehicles, to recycle metal cans and other materials. Any proceeds made from selling materials would be used to cover costs and subsidize green renovations in the Greek houses. He envisions the program starting at the U of A, but spreading to other regional campuses. The plan received a $1,000 seed grant.


Tyler Hartney and Jake Golden proposed an outreach program called “At the Core” to bring community leaders and high school students together to discuss controversial issues, and combine them with volunteer activities and/or workshops to bring address real world problems. This project also received a $1,000 seed grant.


“Our Center for Community Engagement, under the leadership of Angela Oxford, continues to set new standards of excellence through various initiatives on behalf of our students,” said Danny Pugh, vice provost for student affairs and dean of students. “I am so very appreciative of student affairs’ partnership with the provost and academic affairs to support our involvement in the CGI University. This visionary collaboration is indicative of what happens when student affairs and academic affairs come together to support students.”