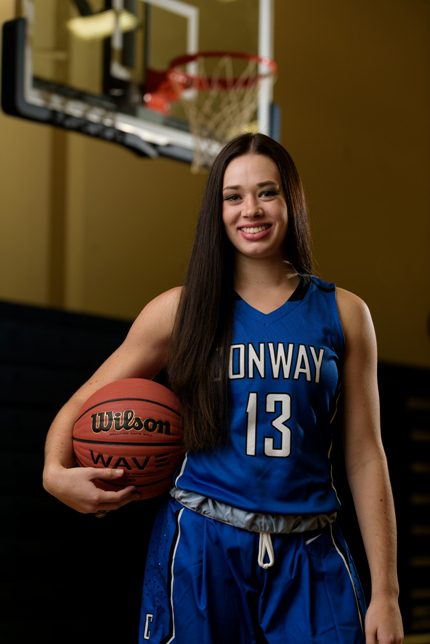 
Savannah Lowe is a rare breed.


The Conway guard moved up to the Lady Cat varsity team during her freshman season and has played a role in three straight 7A state championship appearances, which included a title win in 2014.


“Three state championship games in our state’s highest classification — I do not believe any other player in Arkansas can say that,” said Conway Coach Ashley Nance.


“Each year winning the semifinals game to get into the state finals were awesome moments,” Lowe said. “With the last two, it was just great knowing I would get to experience it all again.”


But obviously, topping it all off with the state title in 2014 was her favorite.


“Not at all,” he said. “We have only seen a handful of freshman play on either team, but certainly no player who contributed as a freshman like she did — and she has never looked back. The squared shoulders at release of her jump shot, that consistent shot, the way she comes off a screen, squares up and shoots — she had that as a freshman, and it stood out. The only way you knew that she was a freshman was because it said ‘9’ next to her year in school. Nothing about her game led you to believe she was a ninth-grader.


“I would think she will end her career wearing a Lady Cat uniform in more games than anyone. I don’t know who could have possibly played in more over their career.”


Lowe was selected to this year’s 501 Basketball Team — 34 players representing the best the 501 has to offer both on and off the court. The team is sponsored by First Service Bank and First Security Bank. She was nominated by Nance.


“Savannah is an extremely hard worker,” Nance wrote in her nomination. “When she is on the court, she gives every ounce of energy and effort she has in her. Last season, Savannah helped lead our team to a 32-2 record with only one loss in Arkansas, which came in the 7A state championship game.


“This season, we’ve looked to her to be a leader and take the experience she has developed over the past three years and apply that to her senior year. Savannah leads by example. She challenges her teammates to work hard in the weight room, in conditioning and on the court.”


After so much success the past three years, the weight of following all that up in her senior campaign has been enormous. But she’s risen to the occasion.


The Lady Cats are 18-6 and currently sit tied for third in a gruesomely difficult 7A Central, which contains the likes of a deep and talented Little Rock Central club (who Conway defeated in an all-time classic in last year’s 7A semifinal matchup) and the defending 7A state champions, North Little Rock (who beat Conway in the 7A championship game last year and have beaten Conway four times this season).


“I want us to, of course, make it to the finals again and hopefully win,” Lowe said. “But also I’d like us to win the 7A Central because it’s a very tough conference.”


Earlier this season in non-conference play, the Lady Cats travelled again to the Sandra Meadows Classic in Duncanville, Texas, finishing in fifth place and notching a win over a team ranked in the Top 10 in the country at the time.


“This team is very dynamic, and we all contribute in big ways,” Lowe said. “It’s very important for us to work together — maybe even more than in past years.”


“I’ve just tried to become more consistent this year in many things, but especially shooting,” Lowe said. “I’ve not always been the best shooter, and as a younger player I struggled at times with confidence. I knew I could be better so I just kept pushing myself until I felt like I was consistently playing how I felt was a good performance.”


And all of Lowe’s hard work on and off the court has paid off. She recently signed a letter of intent to play college basketball as a University of Central Arkansas Sugar Bear.


“Mentally, I’ve had to believe I could achieve my dreams of becoming a Division I basketball player, and I struggled at times working towards that,” Lowe said. “I love watching UCA and the emphasis they place on defense. The coaches are sincere and people I would love to play for! It’s also in town, so my support system can come watch me play.


“It’s a new phase in life. I get to meet new people and live on my own and play at the next level, and I like the color purple.”


Matthews, who also does public address announcing for UCA, is thrilled that he’ll get to cover Lowe for four more years.


“I saw Savannah and her family sitting in the stands watching the Sugar Bears last weekend and thought at the time, ‘She would be a great fit at UCA.’ Then I learned during the men’s game later that afternoon that she had announced her commitment. She will be a great college player, and I hope Conway fans will come out to the Farris Center and continue to watch her play.”


Lowe hasn’t played other sports at Conway in the past, but this spring she plans to run track after basketball is over. Outside of sports, Lowe is also a member of Delta Beta Sigma.


Reflecting on all the success over the past four years, Lowe is quick to point to Coach Nance.


“It’s cool to play for such a well-known, successful coach,” she said. “She only wants the best for us and is constantly challenging the team and me individually.”


The Lady Cats play host to Cabot at 6 p.m. Friday.