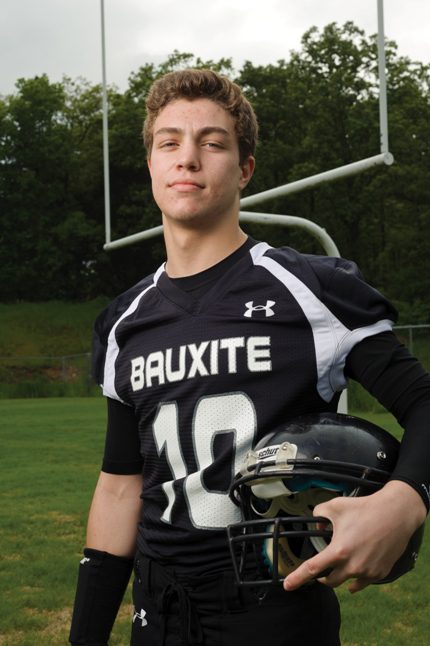 
Bauxite quarterback Zack Baxley knows how to stand tall in the face of adversity. For the senior, high school life has become a balancing act between schoolwork, family and staying healthy enough to continue playing the game he loves.


“Zack is a great young man who has had to overcome a lot of adversity like injuries, but has stuck with the commitment he made in the seventh grade to his teammates,” said Bauxite head coach Dustin Prescott.


Baxley was selected to this year’s 501 Football Team — 27 players representing all 11 counties of the 501. The team boasts the best the 501 has to offer both on and off the field.

Baxley was nominated by Prescott.


“Zack is very intelligent and possesses a strong work ethic,” Prescott said. “He is respectful toward his teammates and opponents, leads by example and always gives his all. I expect him to help our team become successful through his play and leadership.”


At 5 years old, Baxley got his start playing backyard football with older brothers Matt and Chad.


“My brothers are quite a bit older than me, but I’ve always looked up to them,” Baxley said. “When we would go play football out in the yard, they were always a little rougher with me, but I think it helped me get tougher as I was growing up.”


At the time, Baxley didn’t know just how much he would need that toughness provided by his brothers. Since suiting up for the senior high team, Baxley’s football campaign with the Miners has been far from easy.


“During my sophomore year, I dislocated my shoulder, but played through the pain,” Baxley said. “I was playing defense that year, too, and it was especially tough when I would lower my shoulder to make a tackle.”


A dislocated shoulder would only be the first of many injuries for Baxley. Between his sophomore and junior seasons, the quarterback suffered a broken arm in a car accident and a broken elbow just before the 2014 season began.


“My elbow didn’t heal right, so I played most of the year last year with a fractured radial head,” Baxley said. “[In week nine] Against Arkadelphia, I tore my PCL. While I was out for that, I had surgery on my elbow as well. Since then, my knee has healed nicely, but my elbow still didn’t, so I had another surgery on my elbow this spring.”


Despite his injury woes, Baxley refused to walk away from the game he loves. While others spent the summer having fun and relaxing, Baxley spent his summer healing — trying to become strong enough to suit up for just one more year with his team.


“I’ve been around football my entire life,” Baxley said. “I love this game. Nothing was going to stop me from playing this year. As a senior, I know there will soon be a day where I have to stop playing, but until then, I’m going to keep playing as long as I can and as hard as I can.”


Winless in the team’s first three games this season, Baxley and the Miners have been working even harder with Class 7-4A conference play on the horizon.


“We don’t have as many athletes as some of the other teams in our conference do, but we have heart,” Baxley said. “We lost a lot of players from last year, but have also had a lot of players step up. We have a new coach and a new offense, but I’m confident that we’re moving in the right direction as a team. Every Friday night, we’re going to come out and give it everything we’ve got. Ultimately, I just want to be the best leader I can be for the team and help us get us far as we can.”


Off the field, Baxley maintains a plethora of extracurricular activities. In addition to football, Baxley plays point guard for Bauxite basketball and runs long distance events for the school’s track and field team. In the classroom, Baxley is vice president of FBLA, parliamentarian on student council and is a member of FCA, NHS and the yearbook staff. In the community, Baxley is active in the youth group at Holland Chapel Baptist Church and travels on mission trips often. For the busy senior, Baxley says that it’s not about personal gain, but giving back to the community he calls home.


“I love this community,” Baxley said. “My dad went to school at Bauxite, and most of our family is from the area. My mom is a teacher here, too, and she always pushes me to help me maintain my 4.0 GPA. I’m very lucky to be so close to them. They’re my biggest fans.”


Baxley and the Miners play host to Malvern at 7 p.m. Friday.