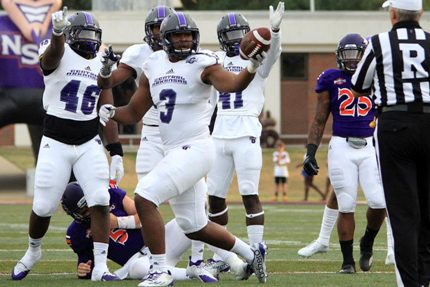 04 May 2016 UCA’s Woodard drafted by the Jacksonville Jaguars

University of Central Arkansas’ Jonathan Woodard was sitting in his parents’ living in Jacksonville, Fla., on Saturday afternoon when he was drafted in the seventh round of the 2016 NFL Draft by, of all teams, the Jacksonville Jaguars.


Woodard, a 6-foot-6, 275-pound defensive end from Brentwood, Tenn., was the No. 226 overall pick in the draft, and the seventh player chosen by the Jaguars. He is the fourth UCA defensive end to be drafted since 2007. He joins Markell Carter (New England Patriots 2011), Larry Hart (Jacksonville Jaguars 2009) and Jacob Ford (Tennessee Titans 2007). Hart was drafted in the fifth round as the No. 143 pick by the Jaguars.


Woodard is UCA’s second player drafted in the past two seasons, along with wide receiver Dezmin Lewis, who went to the Buffalo Bills in the seventh round of the 2015 draft.


“We’re only about 10-15 minutes from the stadium, so it was pretty surreal,” said Woodard, whose parents moved from Brentwood to Jacksonville in December. “I got the call and I was sitting on the couch. Nobody in the room actually knew who I was talking to until I said ‘Thanks coach, I’m blessed to be a Jaguar.’ And the whole room just lost it.


Woodard, a four-time All-Southland Conference selection and the 2014 SLC Defensive Player of the Year, was the 2012 SLC Freshman of the Year. Woodard was a finalist for the Buck Buchanan Award as the top Football Championship Subdivision (FCS) defensive player in 2014.


Woodard, a member of the SLC All-Academic team, is UCA’s career leader in sacks (30.5) and tackles for loss (53), and also holds the school record for single-game sacks with 3.5 against Stephen F. Austin in 2014.


“So many emotions,’ Woodard said. “Honestly, I think it still hasn’t hit me. I think over the next couple of hours, when I just sit and reflect on my whole career at UCA, my high school career. Looking back at all of that, it’s just hard to grasp how long a road it’s been.


“Wasn’t very highly recruited coming out of high school and UCA came up kind of as a last-minute deal. I committed late and it ended up being the best situation I could have possibly asked for. I can’t be more grateful for the position I was put in, for the great groups of coaches I got to play for… and especially an amazing defensive line coach (Dan Augustine) to play for and learn from. He’s really like family to me.”


Woodard will soon report for a mini camp, just down the road at Jacksonville’s EverBank Field in Downtown Jacksonville.


“I knew they were interested, but you never really know how the draft is going to go,’ said Woodard. “I just had to be patient and hope they called my name.


“I’m just ready to get back to work. Ready to go to mini camp and start working. I’m just very grateful for this opportunity for everything in my career.”