Central Arkansas Softball senior Kate Myers has received the Southland Conference’s prestigious F.L. McDonald Scholarship, the league’s foremost academic award. It is presented to two student-athletes, one male and one female, as selected by the conference’s Faculty Athletic Representative Community.

Myers, a shortstop from Tulsa, recently graduated with a degree in biology with a flawless 4.00 GPA. A 2018 All-Conference Honorable Mention, she led the Bears in doubles and RBI this season, and plans to attend the Oklahoma State University College of Osteopathic Medicine. 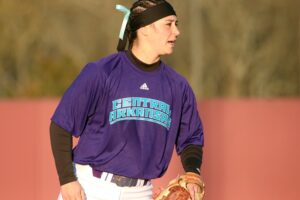 “We are really happy for her and all that she has accomplished; there is no one more deserving than she is.”

She is a member of Alpha Chi Nation Collegiate Honor Society and Sigma Phi Alpha, both of which base membership on GPA, in addition to being a member of the National Society Leadership and Success.

The McDonald Scholarship, a $5,000 award that must be applied to graduate study at a school of the recipient’s choice, was established in 1996 in memory of F.L. McDonald, a former president of Lamar University and 1999 inductee of the Southland Conference Hall of Fame. McDonald, who was serving as Lamar’s President during the league’s founding in 1963, is considered one of the Southland’s founding fathers.

Myers, along with fellow recipient Marlon Walls of Stephen F. Austin, will be recognized at the annual Southland Honors Dinner and Ceremony, held at the Westin Stonebriar Hotel in Frisco, Texas, on Tuesday, May 22.