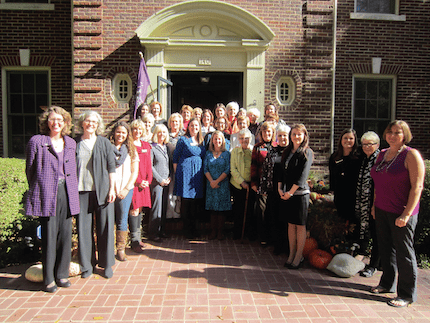 
“When women win, we all win: Linking the education of women and girls and Arkansas’ economic transformation.” Yes, this is indeed a true and accurate statement. It is also the title of one of three award-winning proposals to receive funds from the UCA Foundation’s Women’s Giving Circle.

The UCA Women’s Giving Circle was established to provide and encourage unique learning and leadership development opportunities that will enrich the lives of women and girls.


The brainchild of UCA alumna and donor Nan Snow, the Women’s Giving Circle was officially launched in the spring during a reception at the home of UCA Trustee Sheila Vaught. Jan Davis, UCA Director of Planned Giving, worked tirelessly with Snow to ensure a successful inaugural year.


Success is defined by its mission: “Through the financial support of its members, the WGC strives to make a difference for UCA, its programs, its faculty, staff, students and organizations by providing an innovative source of funding.”


Create a pool of grant funds from women to women, focusing on projects and programs benefiting women and girls.


Allocate funds and award grants based on a majority preference expressed by vote of WGC members.


Encourage women as leaders in philanthropy.


Connect women alumnae and friends of UCA directly with projects and programs of the university.


Change is occurring. In addition to the proposal named above, which Dr. Rhonda McClellan is managing, two other proposals were awarded funds. Dr. Taine Duncan was awarded a grant to assist with bringing speakers to UCA for Gender Studies Minor Presents Women’s History Month. Dr. Ginny Adams was awarded funds to help with costs associated with the Girl Power in STEM (GPS) Conference to be held in April.


WGC members and award recipients were treated to a Celebration Luncheon at the home of UCA President Tom and WGC founding member Melissa Courtway on Nov. 10.


In his welcome, President Courtway thanked Snow; Davis; Shelley Mehl, VP for Institutional Advancement; and the membership for not just launching this initiative, but also he acknowledged that the Women’s Giving Circle has “taken off faster than anything else” he has witnessed.


Membership in the UCA Women’s Giving Circle is open to all interested alumnae and friends of UCA. To join, contact Jan Davis at the UCA Foundation, 501.450.3740 or [email protected]

There are giving levels for alumnae or friend, UCA faculty and staff and junior membership for new graduates 25 to 35 years of age.


Jan Davis also shared that “several men have contributed the annual membership gift in honor of their spouse or loved one.”