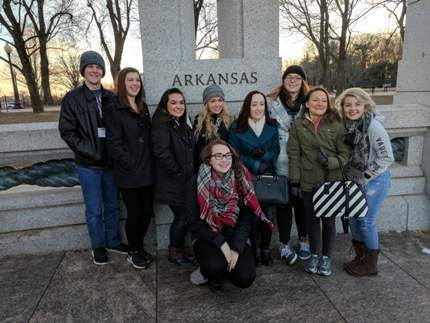 
This is the ninth Presidential Inauguration Academic Seminar hosted by the Washington Center. The Inauguration Seminar marks the end the of the Campaign 2016 Seminar Series, of which 300 students also attended the Republican National Committee and Democratic National Committee conventions. Students were asked to elevate their critical thinking above the noise of the current political discourse and become part of a generation of leaders with the power to pursue bipartisan cooperation.


“Seminar participants have an opportunity to witness the most important event in our democracy: the peaceful transfer of power,” said TWC President Chris Norton. “I think our conversations during this seminar will have a multiplier effect on participants, who will continue this discourse at their institutions, in their careers and in their communities.”


More than 340 students from dozens of colleges and universities attended the two-week seminar. Since 1985, thousands of students have attended the Inauguration Seminar. To date, it remains the only national academic program of its kind and size.