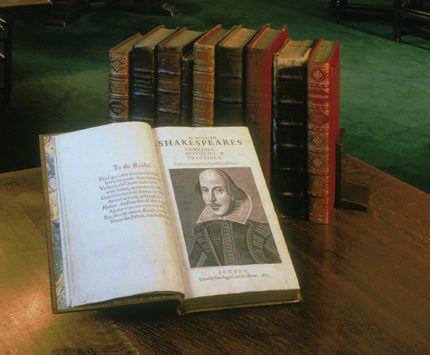 31 May UCA selected as site for Shakespeare’s First Folio

The University of Central Arkansas and Arkansas Shakespeare Theatre have been selected as hosts for Arkansas for “First Folio! The Book that Gave Us Shakespeare,” a national traveling exhibition of the Shakespeare First Folio, one of the world’s most treasured books.


The Folger Shakespeare Library, in partnership with Cincinnati Museum Center and the American Library Association, is touring a First Folio of Shakespeare in 2016 to all 50 states, Washington, D.C., and Puerto Rico.


"We are honored to have been selected as one of the institutions to help share this extraordinary part of the world’s cultural heritage from the Folger Shakespeare Library’s collection,” said Mary Ruth Marotte, executive director of Arkansas Shakespeare Theatre. “For most people, this will be a once-in-a-lifetime opportunity to come within inches of one of the most influential books in history.”


Arkansas Shakespeare Theatre will celebrate its 10th anniversary season in conjunction with the First Folio Exhibition, which will run June 7 through Tuesday, July 12, in the Baum Gallery on the UCA campus.


“The First Folio is the book that gave us Shakespeare,” said Michael Witmore, director of the Folger Shakespeare Library. “Between its covers, we discover his most famous characters — Hamlet, Desdemona, Cordelia, Macbeth, Romeo, Juliet and hundreds of others — speaking words that continue to move and inspire us. Shakespeare tells the human story like no one else. He connects us to each other, to our history and to themes and ideas that touch us every day. We are delighted that we can share this precious resource with people everywhere, from San Diego, Calif., to Gurabo, Puerto Rico, from Eugene, Ore., to Duluth, Minn.”


The Folger Shakespeare Library holds 82 copies of the First Folio, by far the largest collection in the world and more than a third of the 233 known copies in the world today. It is believed that 750 copies were originally printed.


Accompanying the rare book will be a multi-panel exhibition exploring the significance of Shakespeare, then and now, with additional digital content and interactive activities. UCA is planning numerous programs for the public around the First Folio exhibition.


“First Folio! The Book that Gave Us Shakespeare” has been made possible in part by a major grant from the National Endowment for the Humanities: Exploring the human endeavor, and by the generous support of Google.org and Vinton and Sigrid Cerf.