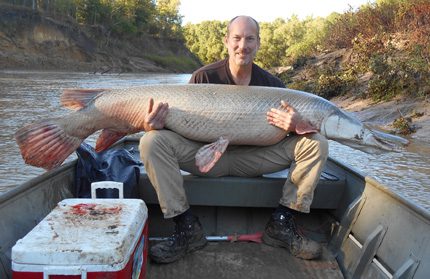 Environmental writer Mark Spitzer, author of numerous fish books, recently traveled to Nebraska on a quest of the state record bowfin (Amia calva) for a book he was researching on fish of the American West.

Although Dead Timber Lake (in which the current state record was caught in 1982) failed to produce the prehistoric, eel-finned monstrosity Spitzer sought, he did catch a massively astounding yellow bullhead (Ameiurus natalis), a common species throughout the state that had never been entered into the official Nebraska Game and Parks Commission record books.


Spitzer, a professor of creative writing at the University of Central Arkansas, has appeared on Animal Planet’s “River Monsters” and has consulted for NatGeo’s “Monster Fish” as an authority on alligator gar. Spitzer’s latest fish book, “Beautifully Grotesque Fish of the American West,” has just been published by the University of Nebraska Press.


“In this one, I go after the most demonized fish in our midst while interviewing those who know them best,” said Spitzer.


“Mark Spitzer manages to capture all our favorite grotesque fish in his latest frenetic adventures while making you feel like you’re right there with him in the boat!” said Solomon R. David, postdoctoral research associate at the John G. Shedd Aquarium. “He also delivers a genuine message of conservation to benefit fish and people.”


This action-packed, eco-conscious narrative offers practical solutions for problems ranging from dealing with climate change to sustaining balance in fisheries amid ecosystem chaos.