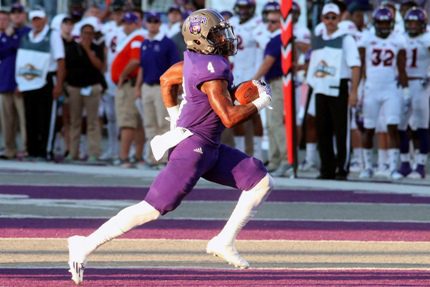 The University of Central Arkansas Bears recently had 12 players named to the 2016 All-Southland Conference football teams.


Five more Bears were named honorable mention following a regular season that saw UCA finish 9-2 overall and 8-1 in conference play, with the lone SLC loss to the No. 1 team in the nation, Sam Houston State.


Desmond Smith, a senior from Bentonville, is second in the SLC in receptions per game at 5.5. He has 61 receptions for 808 yards and six touchdowns. Smith broke the UCA career record for receptions last week and now has 217 career catches. He is also second in career receiving yards with 2,743.


Mallett, a junior left guard from Harrison, (Yellville-Summit HS), helped the Bears average 448.6 yards per game, second in the SLC. UCA rushed for a league-high 203.1 yards per game. Toliver, a senior tackle from Duncanville (Texas) High School, anchored a UCA defense that allowed just 67.9 rushing yards and 20.6 points per game, both tops in the conference.


Odum is the Bears’ leading tackler with 74 stops, including 7.5 tackles for loss and 2.5 sacks, as well as an interception returned for a touchdown, three forced fumbles and two fumble recoveries, despite playing the second half of the season with an injured hand.


Best, a junior defensive end from Little Elm, Texas, has 27 tackles, including 9.5 tackles for loss and 5.0 sacks, along with 2 pass breakups and a forced fumble. Spurlock, a two-year starter at safety from Dallas, is UCA’s No. 2 tackler with 60 total stops. He also has an interception, two pass breakups, a forced fumble and a fumble recovery.