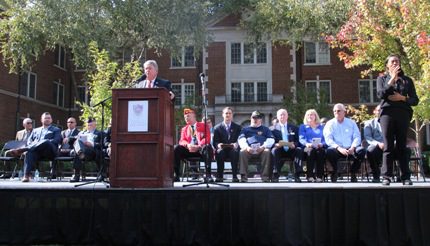 
The event, held on the lawn in front of McAlister Hall, commemorated and honored the service of all veterans of the U.S. Armed Forces. It also served as the dedication of the university’s War Memorial, installed at the north end of McAlister Hall.


UCA President Tom Courtway welcomed those in attendance. “This is a great tradition that we have on this campus. We thank all of you for being here. We are pleased and very honored to have so many guests with us today,” Courtway said. “To the families of the persons who are listed on the new All Wars Memorial, we appreciate your attendance. It means a lot.


“On this day, we honor all of our veterans. On behalf of the board of trustees and the entire UCA community, we want our veterans to know that while we honor them and celebrate Veterans Day every November, in all sincerity, every day ought to be Veterans Day.”


Courtway asked that all veterans and the families with loved ones listed on the memorials to please stand to be thanked and recognized for their service. “Without yours and their dedication and sacrifice, we would not be a free people to read and learn, speak, worship, assemble and live our lives the way we do now. Often and very sadly, we take those rights for granted.”


Courtway pointed out that this year’s celebration was particularly significant because of the dedication of the new memorial. “This day is doubly important as we dedicate the All Wars Memorial and honor the alums who perished in all wars and conflicts other than World War II. It marks a milestone in this institution’s history and is long overdue. What a beautiful way to honor these men and women who gave the ultimate sacrifice. Each day as we walk across this campus, we need to take a look at these monuments and remember the sacrifices these people made for us and what it means to live in this great nation.”


“On the north side is the name of the memorial and the emblems of the five branches of the U.S. Armed Forces,” said Jimmy Bryant, director of Archives and university historian. 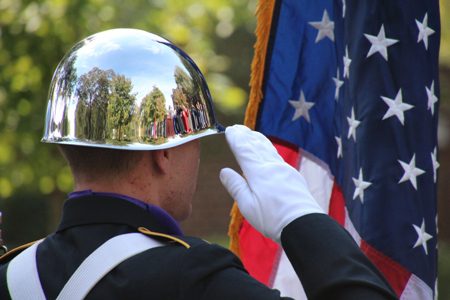 At the ceremony, Bryant read the names of the UCA War Memorial, which was followed by a moment of silence.


Lt. Gov. Tim Griffin was the keynote speaker at the Veterans Day celebration. Griffin has served in the U.S. Army Reserve for 20 years, was deployed to Iraq with the 101st Airborne Division (Air Assault) and holds the rank of lieutenant colonel. He is currently pursuing a master’s degree in strategic studies from the U.S. Army War College, Carlisle Barracks, Penn.


Griffin outlined the importance of Veterans Day celebrations, explaining that in addition to honoring veterans and their families that the observances help educate future generations.


The event concluded with the playing of Taps by a UCA trumpet ensemble directed by Professor Larry Jones.