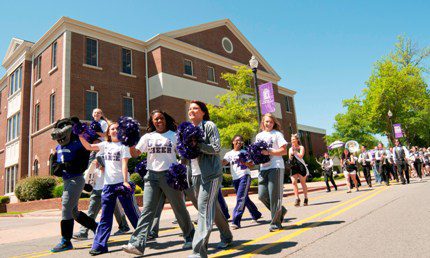 A parade of approximately 200 people, including the University of Central Arkansas Board of Trustees, President Tom Courtway, faculty, staff, cheerleaders and the university jazz and pep bands, along with legislators, city officials, donors and well-wishers recently marched down Bruce Street from one groundbreaking ceremony to another.

The first groundbreaking was for the Lewis Science Center expansion, and the second was for the new Donaghey Hall.

The Lewis Science Center expansion includes a 50,000-square-foot addition for teaching and laboratory space. Also included in the design are features allowing for significant improvements in equipment efficiency and energy utilization with LEED certification.


“We really appreciate the generosity of Conway Corporation for helping make this project come to fruition,” said Bobby Reynolds, board of trustees member. “After this project is finished, we will have a state-of-the-art facility that will attract some of the best and brightest students.”


Donaghey Hall will be a 67,500-square-foot, four-story, mixed-use building at the intersection of Bruce Street and Donaghey Avenue. The first floor will consist of approximately 15,000 square feet of commercial space. The upper floors will be residence hall space with 165 beds for sophomore- and junior-level students.


“These new buildings will be both exciting and transformative for the campus,” said Courtway. Both the Lewis Science Center expansion and Donaghey Hall were outlined in the Framework for the Future, a growth-plan introduced by Courtway in November 2013 during his presidential investiture.