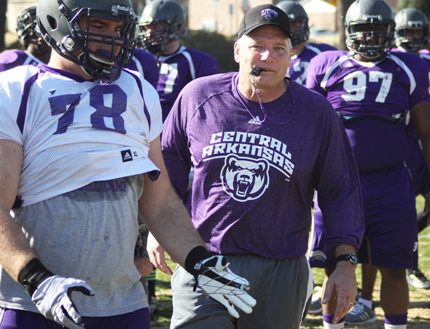 The University of Central Arkansas Bears will have at least four televised football games this fall, according to the recently released Southland Conference television network schedule.

The SLC Television Network and ESPN3 will feature the Bears three times this fall – twice at home at First Security Field at Estes Stadium – among its 15 exclusive football broadcasts in 2014. UCA games featured will include the Saturday, Sept. 27, home game against Nicholls (SLC TV), the Saturday, Oct. 4, matchup at Stephen F. Austin (ESPN3) and the Saturday, Nov. 8, home game versus Lamar (SLC TV). UCA’s season opener at FBS Texas Tech will also be carried by Fox Sports Southwest.


The SLC matchups will be featured on more than 25 regional affiliates across Arkansas, Colorado, Florida, Louisiana, Oklahoma and Texas, as well as to a nationwide audience on ESPN3 and ESPN GamePlan. Five of the telecasts will be shown nationally and exclusively by ESPN3.


"We look forward to another great season of Southland football on the award-winning regional network and ESPN3,” said Southland Commissioner Tom Burnett. "With the growth in affiliate coverage, Southland football is a proven television commodity, and we are excited to continue tell the great stories of competitive excellence and academic achievement within the league."


The Southland Television Network, now in its second season of HD broadcasts, will feature a regional broadcast slate of 3 p.m. games. The final week of the regular season is reserved for a "wild card" selection, as the Southland TV Network will determine which game to broadcast based on the championship race and other factors. The Saturday, Nov. 22, possibilities include UCA at Sam Houston State, Northwestern State at SFA, and Lamar at McNeese State.


Southland Conference Television Network broadcasts will be available on local channels across the region, as well as new affiliates outside the league’s footprint. The full list of stations will be updated prior to each game at southland.org/television. In addition to the Southland TV Network slate, ESPN3 will deliver five exclusive game broadcasts.


The Southland Conference Television Network has won seven Telly Awards, the most recent for its live production of Sam Houston State vs. Southeastern Louisiana football in 2013.  In addition, SLCTV has earned a pair of College Sports Media Awards honors, receiving recognition for best live game coverage in 2009-10 and 2012-13.


Southland teams will also participate in 11 other non-conference telecasts, including the first game of the 2014 season on Saturday, Aug. 23, when Sam Houston State plays at Eastern Washington on ESPN.