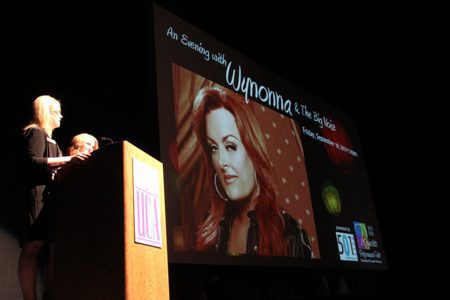 Nearly 200 special guests recently gathered at the University of Central Arkansas for the debut of the 2015-16 season of the UCA Public Appearances.

“This season offers an array of sensational selections for performing arts fans,” said Amanda Horton, director of UCA Public Appearances. “Our Broadway series includes popular titles such as ‘Mamma Mia’ and ‘Joseph and the Amazing Technicolor Dreamcoat’ that bring to the stage fabulous costumes, intricate sets and spellbinding songs.


“We also have many celebrated musicians including Wynonna and The Blind Boys of Alabama that are sure to give moving performances. Rick Springfield will be a perfect fit for Homecoming week and promises to pull alumni back to campus. Finally, I can’t say enough about the importance of having guest lecturer, Bill Nye on our campus. He is an icon in the science world and has been educating our culture for years on the importance of understanding science. This is perfect timing for our campus as we focus on the expansion of the Conway Corporation science educational building.”


Horton also announced a unique presentation. “This year we are collaborating with several departments on campus to bring a special show to the students and community.

‘PostSecret: The Show’ is a powerful performance based off the PostSecret project and books by Frank Warren. This event will be filled with inspiring stories, emotional tales and thought-provoking content.”


As usual, the season will also include Broadway, Pops and Night Out Series and two lectures.


“Serving our community is a top priority at Reynolds Performance Hall and this year we are thrilled to have our inaugural year of a new series that will benefit local school districts,” Horton said. “The Main Stage EdUCAtion Series will increase access to the arts for kindergarten-12th grade students in Central Arkansas. This series will expose students to professional, national touring companies that will link arts and education through exciting performances. Exposure to live theater ignites a child’s imagination in a unique way, opening the door to a greater understanding of the world and a life-long love of the arts.”


At the debut, Horton also reviewed the 2014-15 season and other accomplishments.


“We have had a wonderful season this year with 10 sold-out performances and over 89 percent of all tickets distributed,” she said. “Many improvements have been made at Reynolds, including lobby upgrades with new carpet, and a projector and lobby screen. We have also made technical improvements including a new stage floor, new curtains and new LED stage lights.


“This summer, we will install new carpet in our balcony lobby and new lights for our stairs in the orchestra and balcony section.”


Following the season announcement, guests were treated on the Reynolds stage to a reception, which featured an Asian theme in honor of The National Circus and Acrobats of the People’s Republic of China scheduled during the new season.