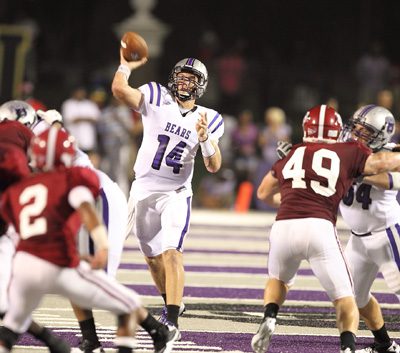 For the first time in school history, the University of Central Arkansas is headed to the postseason in NCAA Division I.

The UCA football team, 8-3 and winners of seven consecutive games, made the 20-team bracket and will travel to Cookeville, Tenn., on Saturday to face the Tennessee Tech Golden Eagles in the first round. Tennessee Tech (7-3) was co-champion of the Ohio Valley Conference. Kickoff is set for 2 p.m.

“It was awesome news for our football team, for our program and for our university,’ said UCA head coach Clint Conque, who took the Bears to two postseason appearances at the Division II level in 2001 and 2005. “It’s very special to be the first program in our athletic department to go to the NCAA championship.

“Certainly this team has shown a lot of resolve and resiliency throughout this season to make that happen. They have great leadership, great belief and faith in each other and the coaches.”

UCA’s last postseason appearance was in the 2005 NCAA Division II Playoffs, where it reached the quarterfinals with two road victories. The Bears were not eligible for postseason play until last season after moving up to Division I in 2006.

The Bears finished with a 6-1 record and in second place in the Southland Conference behind Sam Houston State. UCA’s only three losses this season were to No. 1-ranked Sam Houston and two FBS programs, at Louisiana Tech in overtime and at Arkansas State. ASU won the Sun Belt Conference and Louisiana Tech won the Western Athletic Conference.

“I’m just really proud of our players and our coaches,’ said Conque, who is in his 12th season at UCA. “September was a very difficult month. We lost to the WAC champion, the Sun Belt champion and the No. 1 team in the country and the No. 1 seed in the FCS playoffs. We came out of that month 1-3 and we weren’t very healthy. We played without some of our best players.

“But we just kept grinding and kept the faith. We just showed a lot of resiliency to win seven straight and to get to this point. Pretty exciting stuff.”

The Bears finished the regular season on Nov. 12 with an 8-3 record and are coming off an open date. Tennessee Tech beat in-state rival Austin Peay 49-7 to tie for the conference title. The Golden Eagles got the automatic bid by virtue of head-to-head wins over Eastern Kentucky and Jacksonville State. It was the first OCV title for the Golden Eagles in 36 years and the school will be making its first appearance in the FCS Playoffs since it was established in 1978.

UCA finished first in the Southland Conference, also with a 6-1 record, in 2008 but was ineligible for postseason play during the transition.

The UCA-Tennessee Tech winner will face the Montana Grizzlies in the second round. The second-round games will be played on Saturday, Dec. 3, with the quarterfinals set for Dec. 9-10 and semifinals on Dec. 16-17.

The national championship game will be played Saturday, Jan. 7, at Pizza Hut Park in Frisco, Texas, with the Southland Conference serving as host for the second year.