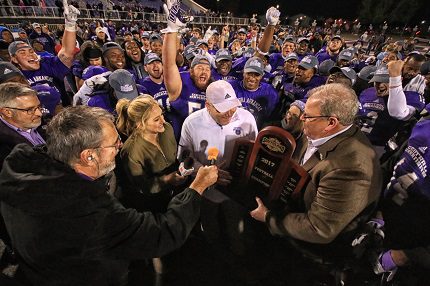 The University of Central Arkansas Bears made it official and undisputed on a cold, windy Saturday afternoon on “The Stripes.”


A convincing 34-0 shutout over the Abilene Christian Wildcats earned the third-ranked Bears their first undefeated and outright Southland Conference championship. UCA, which last won the SLC title in 2012, finished the regular season 10-1 overall and 9-0 in SLC. The win was UCA’s 10th consecutive since a season-opening loss at Big 12 Kansas State.

The Bears earned their first national seed on Sunday, entering the NCAA FCS Playoffs as the No. 4 overall seed and the host of their bracket. With that distinction, the Bears have a first-round bye on Saturday. UCA will host the winner of the first-round matchup between New Hampshire and Central Connecticut State on Saturday, Dec. 2, at First Security Field at Estes Stadium. That winner will take on the winner of Monmouth-Northern Iowa vs. No. 5 seed South Dakota State in the quarterfinals on Saturday, Dec. 9. If the Bears win that second-round game, the next matchup will also be on “The Stripes.”

UCA is one of three SLC teams to make the field, including No. 6 seed Sam Houston State and Nicholls State. The Colonels will play South Dakota, with the winner facing SHSU in the second round in Huntsville, Texas.

This is UCA’s second straight trip to the playoffs and second consecutive season to host a game.


The Bears got the Wildcats’ attention quickly on Saturday, rolling up 495 yards of total offense and holding ACU (2-9, 2-7) to just 172 total yards, and only 25 yards on the ground. The Wildcats, starting a backup quarterback in senior Kade Munden due to an injury, finished with only six first downs had the ball for just 19:09.


UCA sophomore running back Carlos Blackman led a highly efficient UCA ground game, gaining 123 yards on 20 carries (6.2 per carry) and scored on an eight-yard run in the fourth quarter. Senior quarterback Hayden Hildebrand tossed a 78-yard touchdown pass to fellow senior Brandon Cox on the second play of the game and the Bears never looked back.


“It was a great game,’ said Campbell. “In all three phases, offense, defense and special teams, everybody contributed and did a lot of good stuff.  We’re getting better and better, closer and closer, and that’s great to see. That’s what great football teams do, get better as the season goes on. And we are definitely doing that.’


UCA scored on four of its five first-half possessions to grab a 20-0 lead at the half. The Bears’ first-quarter total of 204 yards was more than the Wildcats had the entire game. UCA finished the first half with 347 yards.


UCA’s defense, which pitched its first shutout of the season, has limited its last three opponents to a combined total of 103 yards on the ground and 24 total points. Senior linebacker George Odum had a team-high nine tackles, while sophomore safety Juan Jackson had six tackles and sophomore defensive end Chris Terrell had five tackles, two tackles for loss and a sack.


After Cox’s long touchdown reception, Cooper went 38 yards for a touchdown in the final seconds of the first quarter. Junior placekicker Matt Cummins added a pair of 26- and 25-yard field goals before halftime. Battle capped a 5-play, 38-yard drive with a 2-yard touchdown run with 8:14 left in the third quarter before Blackman scored the game’s final touchdown with 10:28 left to play.


“I think it’s a process, and I think we’re still getting better, which is a good thing to say going into the playoffs,” said Hildebrand, who is No. 2 in career passing yards at UCA and No. 2 in the FCS in passing efficiency.


UCA celebrated the outright championship on Senior Day for 21 players who have combined to win 33 games over the past four years and will now make consecutive playoff appearances. UCA beat Illinois State in the first round last season and then lost to No. 2 Eastern Washington on the road in Cheyney, Wash.


“They love each other, they love football, they love playing the game, they love competing,” said Campbell. “They are a fun group. We talk about having an edge. We were good last year, really good. We went 8-1 in the conference but were missing a little bit of edge and came up just a little bit short. So we challenged the guys to have a little more of an edge this year. Every day do a little something that will make you better.


“And if we’ll do that, if you have 100 guys developing a little more of an edge, then you’re 100 times better. Guys have done that, and in doing that, have developed into a cohesive unit, a very unselfish group that plays hard for each other. And we’ve got a lot of talent, some really good football players.”