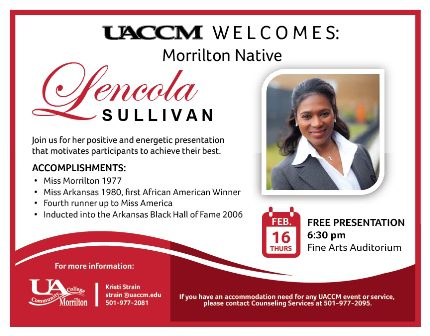 Lencola Sullivan — a Morrilton-native, singer, fundraiser, professional speaker, entrepreneur and the state’s first African-American to be crowned Miss Arkansas — will give a motivational presentation at 6:30 p.m. Thursday, Feb. 16, in UACCM’s Fine Arts Auditorium. This event is being held in celebration of Black History Month.


After graduating from Morrilton High School in 1975, Sullivan attended the University of Central Arkansas in Conway, where she received a bachelor of science degree in theatre arts and speech with an emphasis in broadcasting. In 1977, she made her first appearance in the pageant world, earning the title of Miss Morrilton and placing in the Top Ten at Miss Arkansas. Sullivan was later crowned Miss University of Central Arkansas in 1978, and Miss White River the following year.


In 1980, Sullivan made even greater history by becoming the first African-American Miss Arkansas. This achievement led her to be named fourth runner-up in the subsequent Miss America pageant — the highest award to be given to an African-American contestant at that time. Sullivan was also praised for her singing abilities and was named the Outstanding Talent Winter out of 48 contestants. That talent has been showcased in dozens of venues over the decades, most notably with the Lionel Hampton Orchestra, Stevie Wonder, and Kool and the Gang, along with performances for the U.S. military and at former president Bill Clinton’s inaugural ball.


Sullivan’s professional career includes experience as a weathercaster with two NBC affiliate stations, including KARK-TV in Little Rock. She also has a long list of guest appearances in films and TV, including “All My Children,” a TV pilot with Dick Clark, serving as co-host of New York’s popular talk show “Woman of the Week,” and several commercials and industrial films.


Through a unique gift of self-expression through song and public speaking, Sullivan has been able to achieve significant professional and personal success. Formally a board member of the New York chapter of the National Speakers Association, Sullivan is still a frequent and popular guest lecturer at universities, entrepreneurial events, businesses and social organizations, speaking on various topics including diversity, gender, inclusion, personal development and leadership.


Today, Sullivan lives with her husband in The Hague, The Netherlands, where she works at the Royal Dutch Shell Headquarters. Apart from leading diversity and inclusion workshops across the U.S. and Europe, she recently served as moderator for a TedX event that was broadcast to over 21 Shell locations around the world.


Sullivan will begin her presentation at 6:30 p.m. in the fine arts auditorium, with doors opening 30 minutes prior. The event is free and open to the public.


For more information, contact Special Events Coordinator Kristi Strain at 501.977.2081 or [email protected]. If you have an accommodation need for this event, please contact Counseling Services at 501.977.2095.