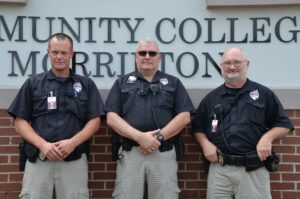 Wesley Martin of the University of Arkansas Community College at Morrilton Campus Police recently completed requirements for his Senior Certification as a law enforcement officer. Martin, a police officer since 2003, will be going into his fifth year at UACCM in October.

This now means all of UACCM’s officers, including Campus Police Chief David Hall and Campus Police Officer Richard Ates, have obtained a Senior Certification. Certifications are awarded by the Arkansas Commission of Law Enforcement Standards and Training based on a combination of training hours, years of experience, and how many college semester hours an officer has completed.

“It shows that we, as a police department, have exposed ourselves to more education and training than what is required,” he said. “It’s something on our resume that shows that we’ve worked to make ourselves better. It shows dedication.”

This announcement comes during National Campus Safety Awareness Month. Throughout the month of September, everyone at UACCM — including police officers, staff, and faculty — have reached out to students with weekly programs and in order to promote a safe community on campus.