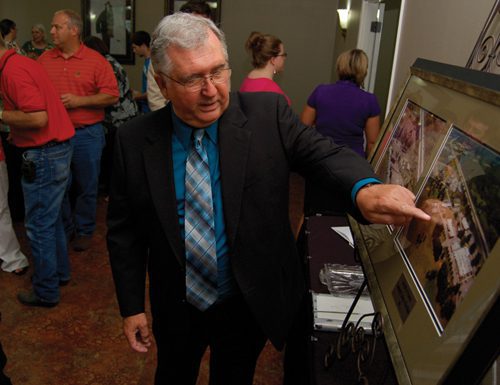 Crook will step down June 30, ending a 25-year stretch of leadership at the college. During the reception, Conway County Judge Jimmy Hart and Morrilton Mayor Bobby Kirby presented Crook with a plaque proclaiming June 3 as Nathan Crook Day.

University of Arkansas System President Dr. B. Alan Sugg also presented Crook with a plaque naming him UACCM Chancellor Emeritus. The UACCM Board of Visitors also announced the naming of the C. Nathan Crook University Center on campus.

UACCM faculty and staff members offered two framed aerial photos—one depicting the campus of Petit Jean Vocational Technical School when Crook began his career in 1985 and the other depicting the UACCM campus in 2010. Since 1985, Crook has overseen an incredible physical growth of the campus with the construction of several major academic and student support buildings. Student enrollment has also seen a near 700 percent increase during his tenure.

The new LDI in downtown Morrilton is one of Crook’s most recent accomplishments, and guests attending the retirement reception also got a firsthand look at the new facility. Located in the former Greer’s Department Store in Morrilton, the completely renovated facility is home to the UACCM Community Outreach Department.