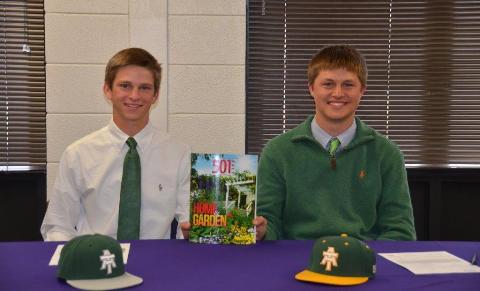 
Two Mayflower Eagles recently signed letters of intent to play baseball at Arkansas Tech University in Russellville. Seniors Jordan Burns and Michael Post will become Wonder Boys after graduating as Eagles in May.

Burns has played baseball since he was 4, under the coaching of his stepdad.


“When I was 8 years old, my team won state,” Burns said. “We played summer ball for the AABA league.”


The senior plays shortstop and pitches for the Eagles, who as of press time were 18-2 on the year.


“I don’t want to lose while I am on the mound,” Burns said. “I would also like to be selected as an all-state player. We want to win state.”


Another trip to state would be a nice end for Jordan’s career. He understands how precious a state tournament appearance is.


“When I was in the 10th grade, my appendix ruptured,” Burns said. “Our team went to state that year, and I couldn’t finish the season or play in the state game. It took time to fully recover and get back to the game.”


Burns also played basketball at Mayflower. When he’s not on a field or court, you can find him in the woods hunting deer or on a lake fishing.


“I enjoy spending time with my family. I enjoy living in a small town where everyone knows you.”


Post, a catcher, has caught many a game for Burns as an Eagle and will have a chance to catch more for him at Tech.


Mayflower’s nice start is nothing new for Post. He’s used to winning.


“Everyone in my family has always played baseball,” Post said. “When I was 13 my team won the state championship. We played youth ball with USSSA.”


And like Burns, Post has big plans for his senior campaign — “in fact we plan to win it all.”


Post has a hard-nosed work ethic, some of which was spurred on by his circumstances on the field.


Post is a Mayflower Eagle through-and-through and is highly involved at the school and in the community.


“I love the people [in the 501] and the fact that we live really close to some of the larger cities but we still have a small town atmosphere.”