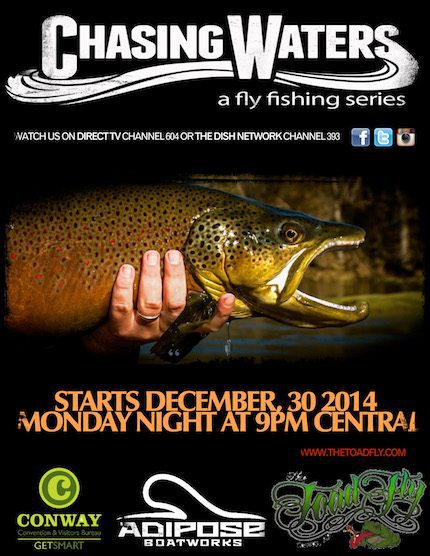 “Chasing Waters,” a fly fishing TV series developed and filmed by Central Arkansas fishing guides will make its debut on Monday, Dec. 30, on the Pursuit Channel.

The weekly show will run for 26 weeks on the Pursuit Channel, which is carried on Dish, Direct and other local cable stations. The show will run at 9 p.m. every Monday and then repeat several more times throughout the week. Pursuit is an outdoor channel watched by sporting enthusiasts and those who enjoy the outdoors across the country. On Dish it is Channel 393 and on Direct it is Channel 604.


The creators’ goal is to show the enjoyment of fly fishing and to expand the sport by letting folks know you can catch any fish on a fly rod…not just trout. Also included is a way to take a vacation for little money, especially in Arkansas.


Conway Corporation does not carry Pursuit but plans are to rebroadcast the show on the cable system’s local station to make sure “local boys” get the coverage they deserve.


The three fishing guides are all a part of The Toad Fly, a retail fly fishing store in Conway located at Clifton and Mill streets. They are everyday guys who just love the sport and decided to capture their adventures on film.


Tim Bull, owner of the Toad Fly, had the idea for the show. “I’ve been hooked on fly fishing for decades and want to show others how captivating it can be. It’s a family affair in the Bull household. The show idea came about while sharing with customers how they can take an affordable family vacation in Arkansas. We did a video and it went viral. We had a contract from Pursuit in three days!”


Others featured on the show are Jordan Case of Conway and Chris Morris of Little Rock, both professional guides.


Family and friends in Conway are getting hyped up about the launch and watch parties are going to be held at The Draft and Buffalo Wild Wings for each original episode. The public is invited and those attending will have a chance to meet the cast.


These three also have a 20-minute video filmed on Greers Ferry Lake that has been selected for the 2014 International Fly Fishing Film Tour which will be shown around the world.  To see four trailers of different shows and the film tour video, visit http://www.thetoadfly.com/chasing-waters-2/.