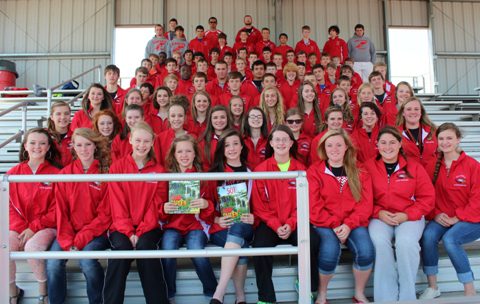 
The Vilonia School District is producing success in track and field that is unmatched in the 501, and it all starts in the junior high programs.


The girls have won the River Valley Conference championship five out of the last six years while also breaking multiple school and conference records. In addition to conference, the girls have won multiple track meets. The guys, too, have had their own fair share of success.


In all the success, the 2014 season may have been the best yet for both programs.


“This last season was phenomenal,” Craun said. “The girls showed so much dedication, determination and desire throughout the season. I was really impressed with the entire team’s work ethic. They had the goal to win a championship, and nothing was going to stand in their way.”


Casey Mae Goff, Krista Hogan, Macy Mckissack and Emily Lassiter made up the 4×800 relay team. Callie Eary, Kylee Linton, Ally Swaim and Kenna Beaty — all eighth-graders — made up the 4×400 team. Both teams won at the conference tournament and, according to Craun, were integral to the team’s overall success.


“My philosophy is to win the first race (4×800) and the last race (4×400) of the meet,” Craun said. “If you have athletes that can do that, the other events will take care of themselves. This year we were able to do just that.


“Our girls ran the fastest 4×800 I’ve ever coached, and they ran it at conference — when it counted most. They may have been beat once all year. They broke the conference record and were five tenths from the school record.”


“We have been blessed with these types of performances the past six years,” Craun said. “I’ve been blessed with great teams, but none of those past teams was able to do what this year’s did. Vilonia is blessed to have kids that aren’t scared of hard work. This year’s team’s motto was ‘Nobody works like we do,’ and I feel that’s true. Our kids just pour so much of themselves into this program.


“The junior high and senior high track programs have won more than 24 conference titles, three state titles, two state runners-ups and multiple top five state finishes in the last eight years. The kids see that success, and they want a piece of it. They want it to continue!”


In the last seven years, the junior high Eagles have won five conference championships and finished outside of the top two only one time.


“Our program success can be attributed to our kids’ dedication,” Stephens said. “They show up and work hard every day in every type of weather imaginable. Our kids understand that we may not be as blessed athletically as some other schools, but that we can always choose to outwork them. If someone were to drive by our stadium at any time that school is not in session, they would see our kids putting in extra work on their own.


“Their dedication leads to the saying, ‘Success breeds success.’ They have learned what it takes to be champions and refuse to settle for anything else.”


“Jason Rail consistently won the 1,600 meter with a personal best time of 4:50 and the 800 meter with a personal best of 2:10,” Stephens said. “Matthew Stanley consistently won the high jump while jumping a school record of 6 feet 2 inches. He later jumped 6 feet 3 inches for the high school team. Both Stanley and Rail placed in the top eight in the high school state championships after the junior high season was over.


“Nick Gentry also placed top two in the shot put and discus in most meets. Julius Price and Matt Foster were also consistent scorers in the throwing events. Mid-distance runners Ethan Janski and Hunter Kelley and sprinters Cody Mitchell and Ben Duff provided steady points in most meets. We also got scored in most meets with pole vaulters Thomas Hutchinson, Nate Norman and Caleb Madden.”
So how do the Eagles and Lady Eagles keep the success running?


“As a coach, I’ve got to do things to keep improving as a professional,” Craun said. “There is so much that I don’t know, so much knowledge to be gained from other coaches — mainly the coaches I currently work with. Guys like Tommy Stephens, Michael Stout and John Steward have so much knowledge in this sport.


“As a program we can’t get complacent. We have created a monster when it comes to expectations. Every year we have the potential to be very successful, but the athletes have to do their part. It’s not going to be given to us. We have got to stay humble and hungry in order to feed the monster!”